Since last year, BT is on a route so far not tried by other telcos. In August 2013, BT Sport was launched: A new TV channel which acquired the exclusive rights to show many of the Premier League football games in the UK. Previously, these rights were with satellite and TV provider Sky. 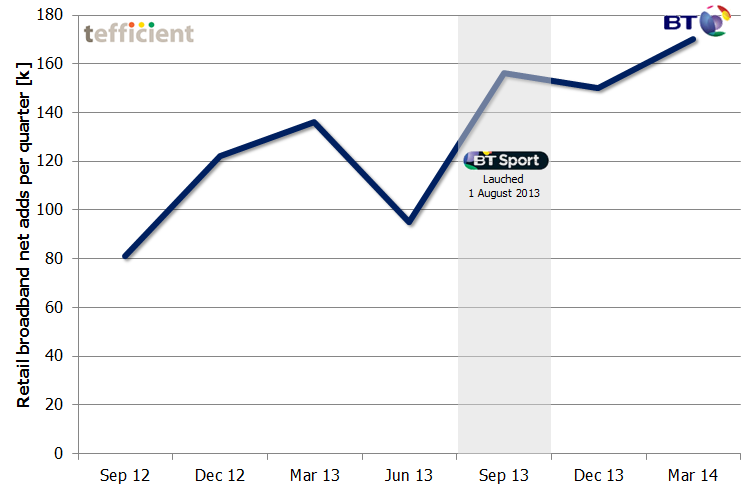 If you want to see Premier League football, you need to become a customer of BT Sport. But that isn’t BT’s primary proposition: Instead, they want you to become a BT broadband customer – since then you get BT Sport included for free. BT uses the sports rights as a tool to strengthen their retail market share in fixed broadband and TV. And that’s an innovation.

The graph shows how BT’s broadband net adds have developed: In a mature market, BT adds more broadband customers after the BT Sport launch than before. 6,8 million customers in June 2013 grew to 7,3 million in March 2014.

But is comes with a high price: In its year to March 2014 report, BT says it spent 450 MGBP (or 3,6% of the total OPEX of BT Group) on BT Sport during the year. Programming rights were 203 MGBP of this. All this is OPEX; the BT Sport related CAPEX was spent last year.

In March, BT had 3 million direct BT Sport customers. In total, BT Sport is in 5 million UK homes. The additional 2 million come via the wholesale agreements BT later have done with e.g. Virgin Media and Sky. Even though these agreements bring revenue to BT (BT Sport e.g. costs 12 GBP per month if you are a Sky customer), they work against the idea of using BT Sport as an acquisition and retention tool for BT broadband.

Future will show if BT Sport became a game changer for BT. So far, it’s been a lot of money: Roughly 3000 GBP of OPEX per additional broadband net add since the BT Sport introduction.