There has been a lot of talk – and increasing irritation – about pigeonholing, especially the younger (18 to 24 year olds), consumers to a tightly defined segment. Generalisations can be dangerous, especially for those companies that still primarily make the effort of engaging with their customers when they are buying something and spend most of their marketing dollars in digital and other forms of advertising. 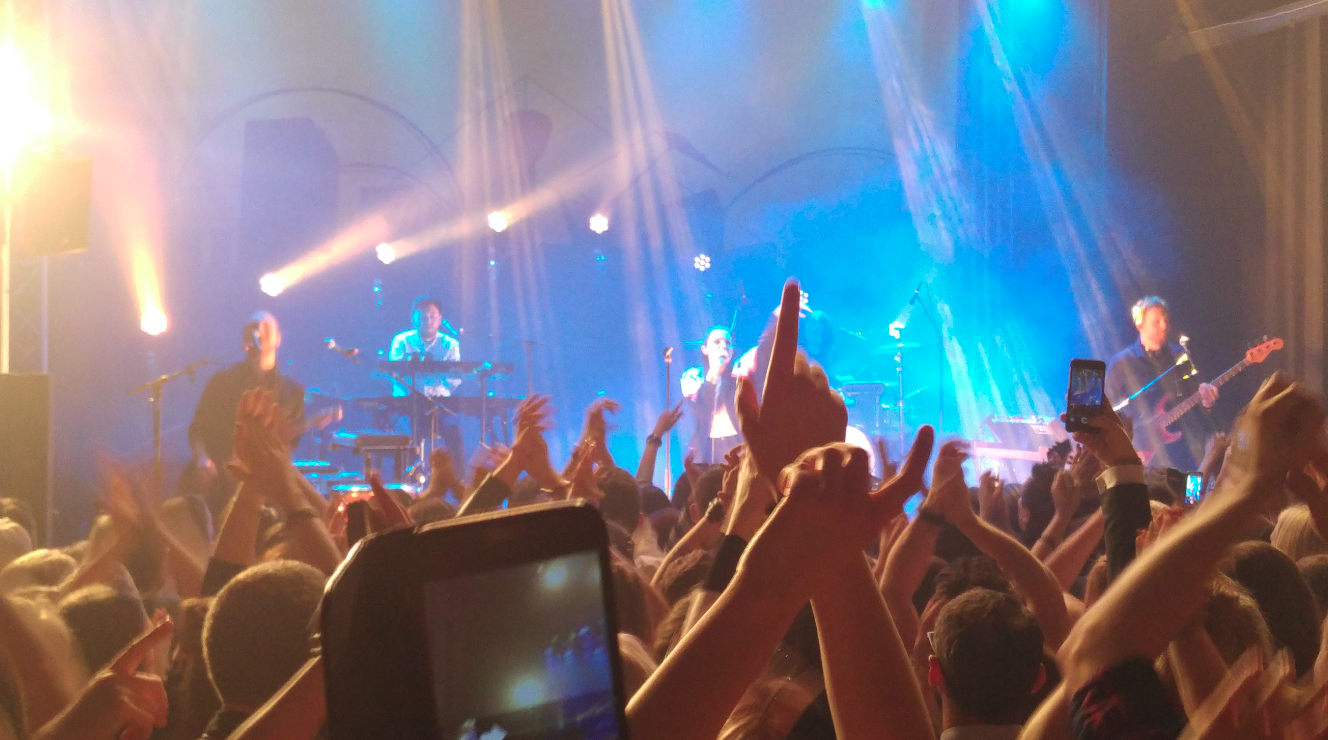 But loyalty comes from understanding what makes your customers tick – and this knowledge can only be derived from active conversations with the community, regardless if they are Millennials or those labelled Generation X. Nevertheless, it is useful to understand broadly how the different consumer segments are behaving and what motivates them. But we’ll come back to this in a bit. 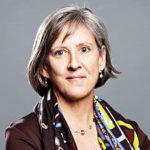 Mary Meeker’s 2016 Internet Trends has just been published by Kleiner Perkins Caufield & Byers (KPCB) and gives detailed insight (over 200 slides worth) into the slowing down of the global internet growth driven by external factors such as the housing and financial crisis as the backdrop, while messaging platforms, visually-oriented networking and user-curated content are making giant leaps forward.

The combined audience for online messaging apps – including market leaders WhatsApp, Facebook Messenger and WeChat – is now in the billions. Global message traffic on chat services has surpassed text messaging and is expected to be used by eight in ten smartphone users as of 2018. Moreover, we can now see a clear divide between generations and their preferred channels – the best ways for companies and service providers to contact Millennials (=Generation Y) is web chat and social media, whereas telephone is still the preferred choice for the older generations (see table below; click to enlarge). 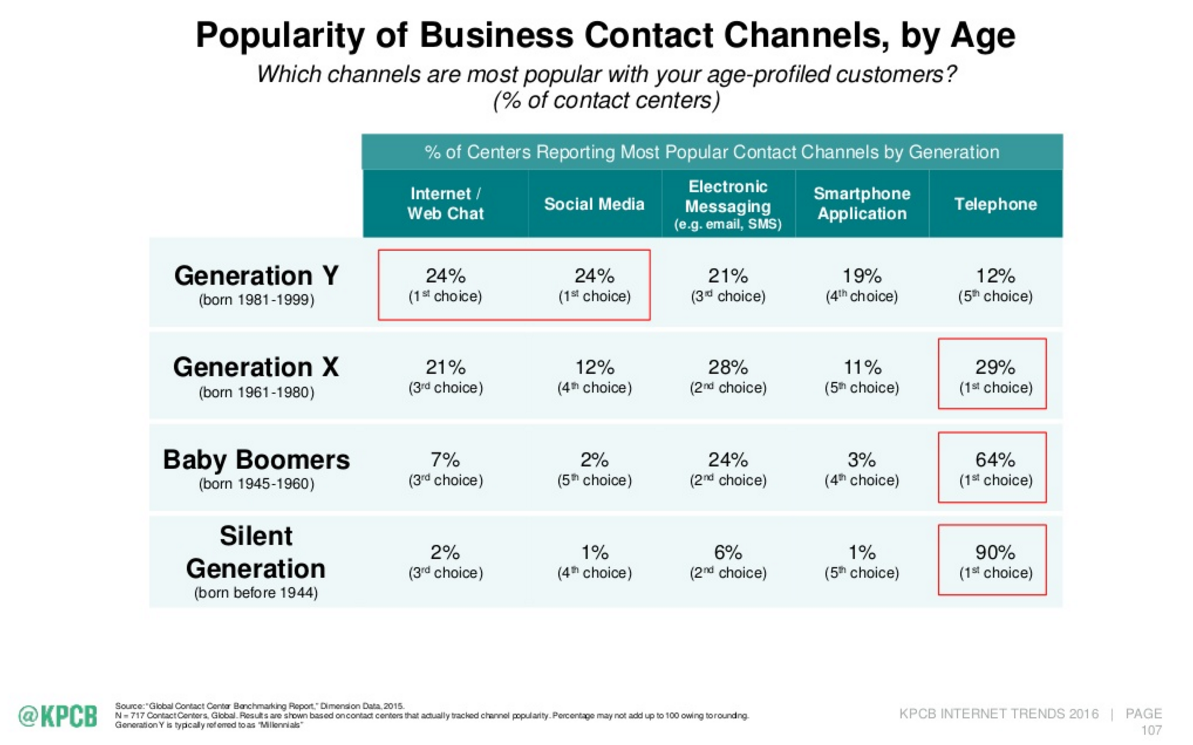 And the differences don’t stop here. We’ve seen the phenomenal rise of WeChat in China that has overtaken other social media platforms in the country – and is now used by the public and private sectors alike to reach their customers and other stakeholders for practically everything, i.e. from instant messaging, sharing, campaigns to e-commerce. Facebook Messenger is now rapidly adding new features to bring it closer to what WeChat offers in China.

And we’ve witnessed the introduction of new, real-time, video and imaging based platforms – such as Periscope and Snapchat – that are based on “transient” content that disappears immediately once a message is read (e.g. snaps & chats in Snapchat) or after 24 hours (Periscope and My Story in Snapchat). Snapchat now has more active daily users than Twitter with 150 million users daily – a milestone it reached in a mere four years after the launch.

According to Mary Meeker, messaging is seeing a lot of change with many of the newer platforms (such as Snapchat, WeChat [China], Line [Japan], WhatsApp) pulling in new users but also earning revenue from being hubs for services such as taxis, food deliveries and other retail & service providers. And global platforms are quickly following the trends that have started from India, China and Japan by evolving their platforms into “communication hubs”.

Earlier in the year, Facebook along with Microsoft both trialled and announced developments in chat-based software. These so called “chatbots” are stripped-down software based agents that understand what you say (or type) and reply by answering questions or by executing tasks. Apple’s Siri and Amazon’s Alexa are already offering this. But Facebook’s plans are bigger, as they’ve already added chatbot capabilities to Messenger for developers. So nothing will stop companies from adding chatbots alongside their contact details to cater for faster and better automated services and inquiries.

So what does this all have to do with segmentation and pigeonholing? Generalisations can be helpful – as a starting point – to understand how your consumer base is changing. Voxburner recently published their latest research into Millennials and their motivations – but with a big cautionary remark not to generalise. A grandma can behave like a Millennial and a Millennial can share old-fashioned values with their parents’ generation. As a friend said: “I’m a millennial too – just from another millennium!”

Ad blocking – or not?

Add to this the recent and growing trend of ad blocking. In the UK alone, the highest level of ad blocking already now is among the 18- to 24-year-old age group, at 47%. Among those currently using ad blocking software almost three quarters (72%) do so on laptops, with 26% on smartphones, 21% on tablets and 41% on desktop PCs (source: Internet Advertising Bureau).

Ad blocking could well correlate with high mobile data traffic and higher penetration of smartphones than PCs (as suggested by Charles Arthur), but according to KPMG the primary reason for ad blocking is simply the dislike for advertising (46%) and adverts taking up too much screen space (47%) followed by lack of relevance, impact on device performance, misuse of personal data and ads using up mobile data allowances.

Some of the telcos have made clear decisions about ad blocking to avoid losing their consumers. Three announced their plan to introduce network-wide ad blocking across their networks in the UK and Italy and is expected to roll this out across all its operations (collaboration with an Israeli company, Shine). In fact, Three UK is now contacting customers to ask them to agree to take part in their first 24-hour ad blocking trial which is scheduled to take place 15 June 2016. 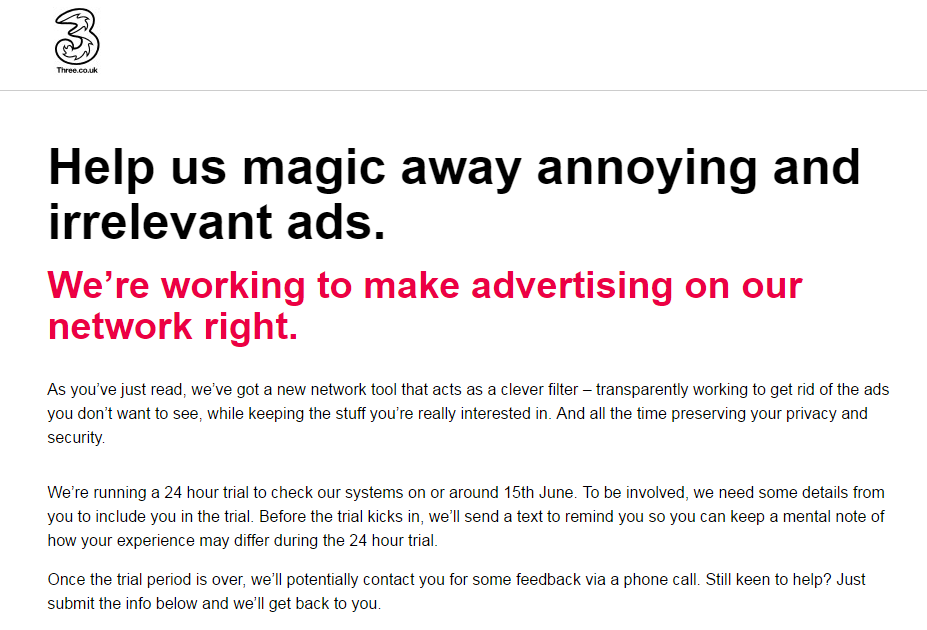 It will be interesting to learn (hopefully, if made public) the difference in data usage before and after the trial for participating Three customers.

EE is also “looking into ad blocking” and O2 is “actively testing ad blocking” – with the purpose of giving more control to the consumer rather than totally removing ads.

Meanwhile Telenor has bought TapAd, an advertising technology firm that offers a unified approach to connecting consumers across different screens. Could Telenor be complementing its legacy business by offering tailored and relevant digital advertising services to businesses and its consumer base?

Riding the tide of instant messaging

So what does this all mean? How to keep consumers loyal – especially Millennials – who expect a higher degree of freedom and instant gratification? Can instant messaging lead to clear and measurable improvements in customer satisfaction and sales? How to “monetise” conversations? There are many more questions, that’s for sure.

But there are also a couple of examples on businesses that are quickly embracing these trends – and making conscious choices to stop naval gazing and step out of their comfort zones in order to win the hearts of their customers over and over again.

Tastes are shifting and changing faster than ever before. While giving more freedom to customers (non-binding contracts, data roll-over, shared plans, etc.), telcos need to find new ways of maintaining a loyal customer base. Instant messaging is now the new social media, and only through continued, uninterrupted conversations (forget clean-cut campaign stages) will businesses maintain and grow its base. Allowing consumers to decide – for example, the choice of receiving advertising or not while using their smartphones – and actively participate in the co-creation of telco brands is by far a better way to engage with your community of existing customers and prospects.

It is not only about operational efficiency and knowing your numbers. It’s about knowing your customers and Nonstop Retention.