2013 ended with over 1 billion smartphones sold – a new record. But mature market operators should look at Korea as a projection of what will come: It is the world’s most advanced LTE market based on penetration and usage levels. 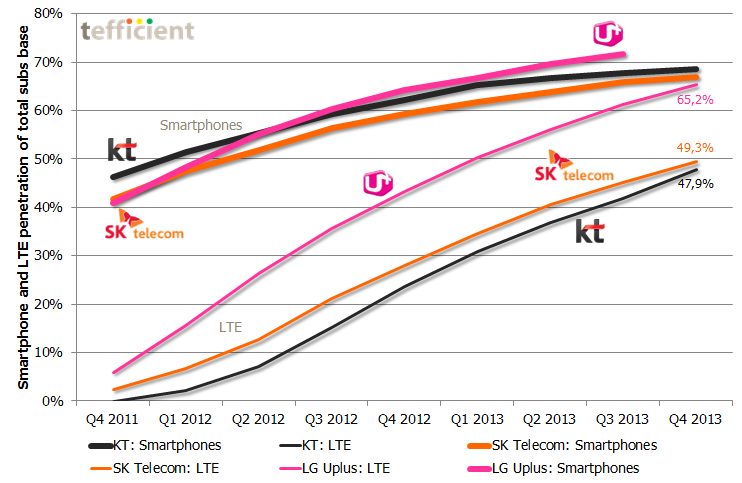 The operators in Korea – SK Telecom, KT and LG Uplus – are continuing to sell a lot of LTE equipment to its customers, even though sales slowed somewhat during 2013. But whereas the sales of LTE equipment earlier led to a lift in overall smartphone penetration, it looks as if it’s not going to drive smartphone penetration very much longer: See how the three top curves in the graph slow down even though the LTE curves go up.

For mature market operators believing in LTE’s ability to take smartphone penetration levels beyond the 70% level observed today in countries like e.g. Sweden, Norway, the Netherlands, Australia, the UK and France this is bad news. The Korean development indicates that LTE as such is not enough.

The situation resembles 2007 – before the arrival of the iPhone. Incremental improvements had made products from e.g. Nokia the best ever, but disruption was needed to create new growth. iPhone was the catalyst in 2007. The mobile world – including Apple – are back into incremental improvements and the current products are the best ever. From where will the innovation come that creates new growth in mature markets?