The subsidy model – which dominated operators’ handset and equipment sales in mature markets for decades – is rightfully retiring. It wasn’t a brilliant idea to discount goods not produced inhouse (taking cost pressure away from equipment manufacturers like Apple) and, to compensate, overcharge for the services actually produced (making over-the-top services and Wi-Fi more attractive).

The subsidy model prevented churn for the duration of the contract, but fuelled churn immediately thereafter. Customers were truly looking forward to leave – and the only method operators found to keep them was to give them a retention offer they couldn’t refuse – if they signed up for another contract period. The problem wasn’t solved, just deferred. At a high cost.

But as we reported in “Early upgrade plans: Sweet now. Turns sour?” operators gradually turn their back on the subsidy model. Today, more operators sell more phones without subsidies.

T-Mobile didn’t invent the installment model – nor the early upgrade plan based on it – but should have credit since it managed to significantly change the business logic of a market previously married to the subsidy model: the USA. 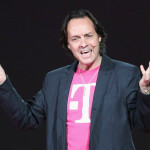 The CEO of T-Mobile USA, John Legere, in his latest blog post made this prediction:

“In 2015, two-thirds of devices will be sold without those confusing subsidies, and more than half of US wireless customers will be contract-free.”

Even though Verizon still believes in the subsidy model, T-Mobile has won AT&T and Sprint over to the installment model camp. It’s a remarkable achievement.

T-Mobile had 84% of its branded postpaid customer base on Simple Choice plans – which are subsidy-free – by end of September 2014. At the same time, AT&T said that “about half” of postpaid smartphone subscribers were on no-subsidy Mobile Share Value plans. With Sprint’s recent move (and with Verizon’s somewhat reluctant me-too), John Legere’s prediction seems realistic. 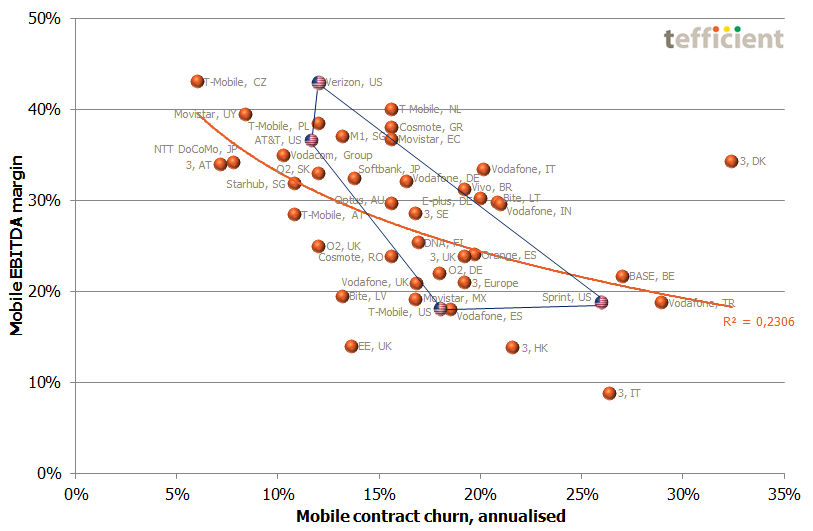 The graph (click to enlarge) correlates contract churn with EBITDA margin for reporting operators globally. We’re happy to note that the strong correlation that used to exist between high churn rate and low margin isn’t as strong any longer. The gradual shift from the subsidy model to the installment model should explain some of it.

We’ve highlighted the four major US operators. The correlation between high churn rate and low margin is stronger (the curve is steeper) than for rest of the world. This shows that there is still a long way to go before the US market rewards the operators abandoning the subsidy model with higher margin or lower churn.

But the first steps have been taken.