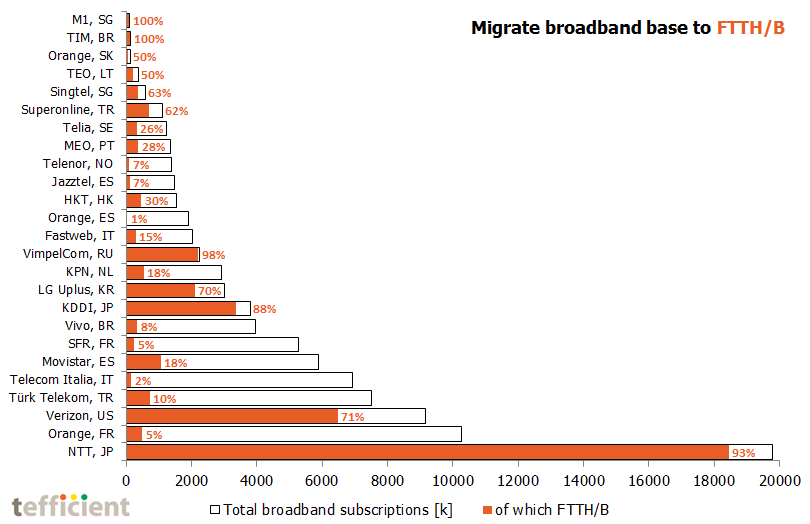 NTT in Japan has the largest fixed broadband base of these reporting operators. 93% of NTT’s fixed broadband subscriptions are FTTH/B – the highest proportion of all incumbent operators in the graph.

Orange has more than 10 million retail broadband subscriptions in France, but only 5% of these are FTTH/B.

Large FTTH/B bases are instead exclusive to Asia, USA and Russia.

The largest European base (1,1 million) is with Movistar in Spain. In reality, many of these are however throttled to 10 Mbit/s in downlink and provided as part of Movistar’s cheapest Fusión quad-play plan. Technically it’s FTTH/B, but the customer experience isn’t fiber-like.

But the next chart shows that building FTTH/B is one thing and attracting subscribers is another. 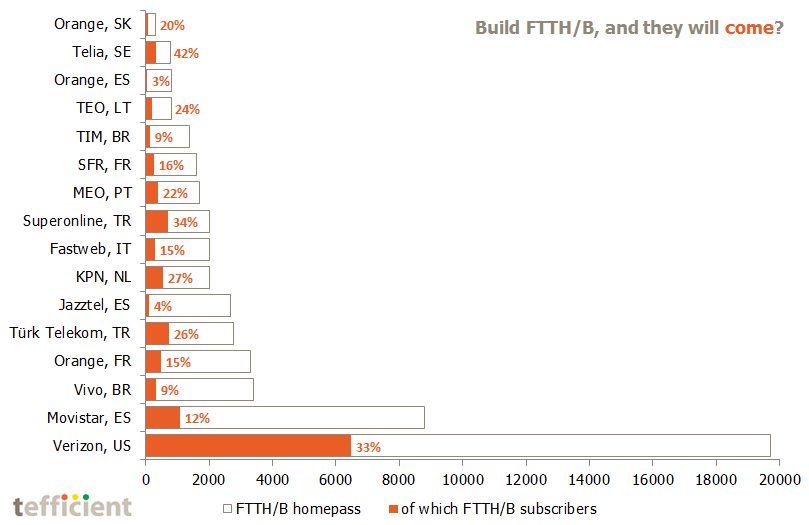 Even our favourite TEO has just managed to convince 24% of their premises passed (normally referred to as “homepass” even though not all premises passed are homes) to become FTTH/B subscribers.

Too few operators report their FTTH/B homepass figures, but for those who do, the sales conversion rate is often low: 15-30% seems typical.

Another explanation is that operators still expect customers to pay a high price premium to get FTTH/B. This is sub-optimal: From a cost point of view, maintaining parallel fixed networks should be avoided. Copper-based networks are old and expensive to maintain.

Verizon – highly ranked in both charts – is one of the best examples of an operator actively seeking to get rid of the copper network. In 2013, Verizon eliminated 600,000 repair dispatches as a direct result of migrating customers served by copper over to fiber. For Verizon, fiber is not only a matter of revenue, but of cost.

Tearing out the copper network isn’t always popular, though. Verizon is currently facing much criticism for pressuring customers to take up fiber. Search for “verizon copper replacement” to see a sample.