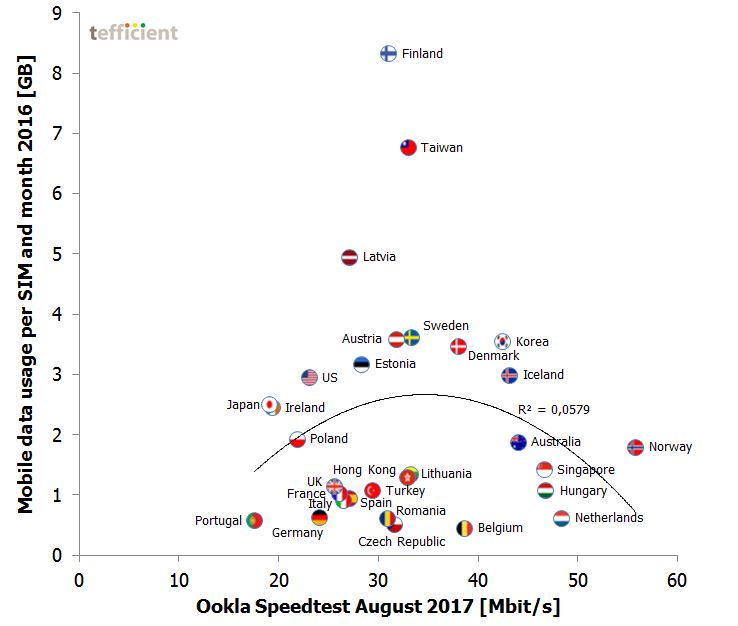 The adherence to the regression line is weak, but it still interesting to note that countries with the fastest networks tend to have low or moderate data usage per SIM – as e.g. the Netherlands, Hungary, Singapore and Norway.

The countries with the highest mobile data usage – Finland, Taiwan and Latvia – are ‘just’ delivering 27 to 33 Mbit/s. To defend Finland, a majority of the Finnish SIMs have unlimited data volumes, but most customers have decided not to pay for full speed. It was just 50% of the Finnish postpaid non-M2M SIM base that subscribed to max speeds above 30 Mbit/s in December.

In the lower left end of the chart, we find a number of countries – Portugal, Germany, Italy, Spain, France and the UK – where the average network experience is a relatively slow one and, logically, average data usage is low.

More work ahead for the speed winners

The operators in the countries that now top Ookla’s Speedtest Global Index should expect that with higher data usage – higher payload – their average speed will go down. Denmark is an example of a country that used to lead in speed. No longer so: With rapidly increasing data usage, Denmark has been falling in the global ranking.

Operators like T-Mobile in the Netherlands and Telenor in Norway have celebrated their speed achievements and communicated their wins in their marketing. Both companies have without a doubt built excellent networks, but our chart shows that the challenge might be in the future, not in the past: The challenge to keep the speed up when customers start to consume as much data as in other countries. To achieve this the toolbox will have to contain tools like more frequencies, MIMO, unlicensed spectrum (LAA, LTE-U), Wi-Fi and TD-LTE to name a few.

In the meantime, may we suggest that the Finnish, Taiwanese and Korean operators are doing the best job given the traffic load?