In our public industry analysis “Peak data” in sight? we use regulator data to identify Finland as the number 1 country in the world when it comes to mobile data usage, beating all the countries which typically are followed closely – USA, South Korea, Japan.

It’s with great pleasure we note that Finland’s third operator, DNA, has followed in its larger competitor Elisa’s footsteps and reported total mobile data traffic. And it is a blast. Too. 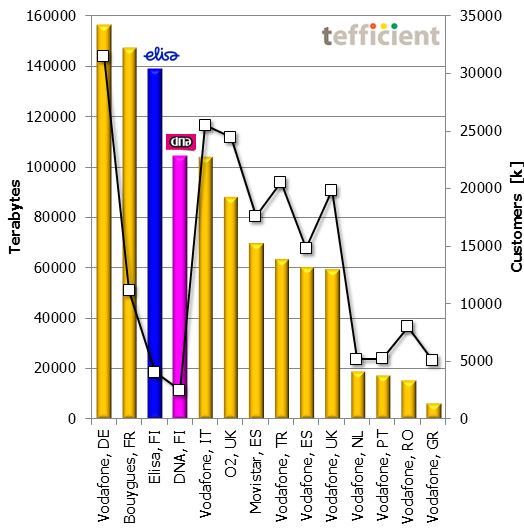 Elisa carried almost as much mobile data on its network in 2014 as Vodafone did in Germany or Bouygues did in France. It’s just that Vodafone has close to eight times the customer base of Elisa. Bouygues – the French 4G first-mover – has a customer base close to three times Elisa’s.

The average Elisa SIM used 2.9 gigabytes of mobile data per month in 2014.

DNA – with 2.5 million SIMs – shifted as many terabytes in 2014 as Vodafone did in Italy. Vodafone’s Italian customer base is 10 times that of DNA. Each DNA SIM averagely used 3.5 gigabytes of mobile data per month in 2014.

Are Finnish operators able to monetise all this traffic? Not directly, but indirectly. As described in “Peak data” in sight?,  Finland is one of very few countries where the unlimited data proposition still prevails. Neither Elisa nor DNA have caps and even though Sonera has, caps are often so high (e.g. 50 GB) that it in reality doesn’t matter. But in order to shift data volumes like that, customers need high, stable, speed. Finnish operators monetise on throughput tiers and so far they have been able to live well on customers’ willingness to upgrade to higher speed tiers. The question is though if customer demand develops in a direction of yet higher throughput also after having taken the step into 4G. Capitalising on the 3G to 4G shift is one thing, but how many customers will care about upgrading from 4G to LTE-A?

Covering Finland isn’t cheap: It is one of Europe’s less populated countries with about 5.5 million inhabitants. And it’s large-sized which makes the population density the lowest in the European Union – 16 inhabitants per square kilometer.

What makes this even worse from a cost point of view is the Finnish habit to spend free time in remote areas – combined with a culture which arguably contains Europe’s highest work ethic. This means that people do not only relax in remote areas; they also work from there. 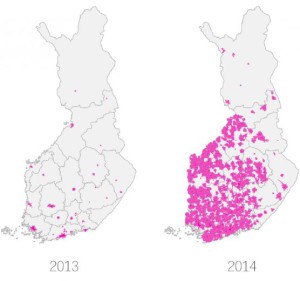 The results aren’t bad. The speedometer app Joikuspeed reported that Sonera’s network was the fastest in 184 countries. [Yes, Joikuspeed is Finnish and the statistical significance in some of those 184 countries might be so-so, but still.]

Elisa refers to a test performed by independent company ECE which shows that Elisa has the widest coverage.

So here’s a chicken-or-egg question for you:

We’re not suggesting other countries to copy Finland’s monetisation model, but:

We suggest you to study the effects high quality mobile networks have on the development of mobile behaviours in life and work, on usage, on the economy, the environment, on international competitiveness and quality of life in general.