We all know that a significant share of mobile operator revenue is equipment, not service, related. Even though equipment subsidisation and lock-in contracts rapidly become less popular, the reality is that if it wasn’t for subsidisation, reported equipment revenues would be even higher.

Our comparison of 80 reporting operators globally – all in mature markets – shows that the equipment revenue to total mobile revenue ratio can be as low as 5% and as high as 77% (click graph to enlarge): 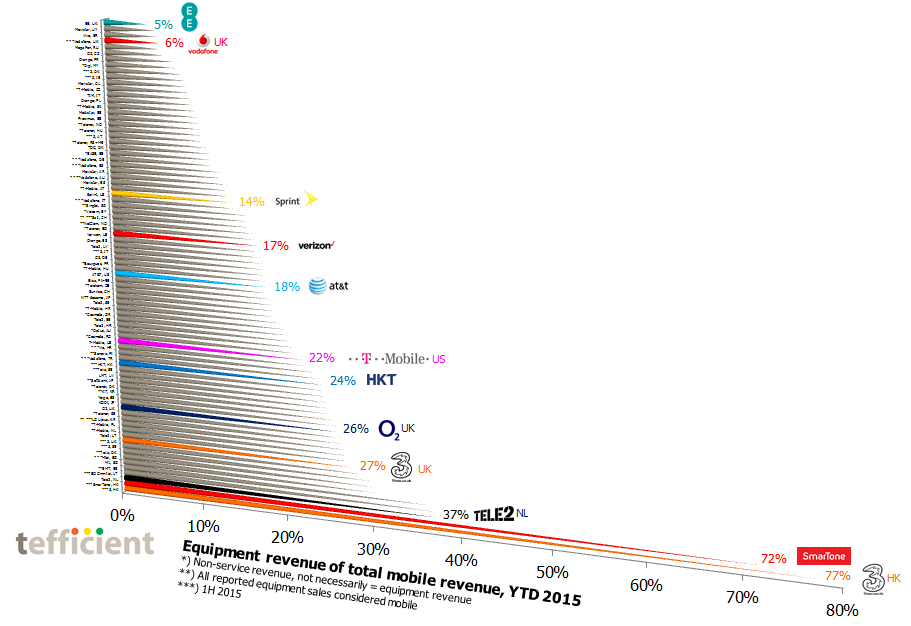 Operators: Contact us to receive a full listing of the operators in the chart

Due to the image size is difficult to distinguish the operators in the graph and we have therefore highlighted a few:

This spring, SmarTone and 3 (in that order) both introduced plans with the option to upgrade handsets more frequently than with the previous 24 month contract model. 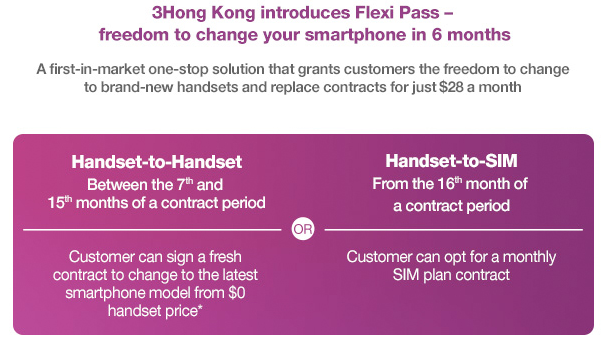 These propositions made 3’s and SmarTone’s equipment revenue explode. If we take 3’s numbers, their equipment revenue grew 242% year on year 1H 2015. Service revenue fell, but just with 11%. Total revenue was up 108% and EBITDA up with 42%. CAPEX was down by 27% and cash flow (EBITDA minus CAPEX) up with 80%.

The question is of course how sustainable this is: Will this upgrade craze continue forever in Hong Kong?

HKT, who recently acquired CSL, didn’t follow and also had a more stable business development with a much lower share of revenue from equipment – 24%.

Third placed Tele2 was still an MVNO in the tracked January to September 2015 time frame. Its 4G-only network went live 12 November. Having planned this for long, Tele2 has been very selective in which handsets it has sold in 2015: Only 4G LTE-Advanced and VoLTE capable handsets – to make sure as many Tele2 customers as possible had the right gear to take full advantage of the upcoming 4G-only network. But these handsets models are also the most advanced and the most expensive – which explains why Tele2 Netherlands has had such a high share of its mobile revenue from equipment.

O2 has with its Refresh instalment plan decoupled the handset from the service (see example below). This drives equipment revenue on the expense of service revenue. It’s therefore logical that O2’s share of revenue from equipment is high.

3 is still having bundled prices: Unlike O2, 3 isn’t itemising the price into handset and service respectively. At the same time, 3 is reporting high equipment revenues. How’s that possible? Well, it’s an allocation – where 3 has favoured equipment revenue over service revenue.

If we identify EE and Vodafone in the top of the graph, they only had 5% and 6% of revenues from equipment respectively. One might assume that they sell small equipment volumes. This is not the case. The explanation is instead EE’s and Vodafone’s dedication to bundled, binding, contracts with equipment subsidy. When reporting equipment revenue, EE and Vodafone deduct that subsidy from the equipment price, not touching the service revenue. This is the opposite approach compared to 3.

US carriers used to be married to the two year binding contract model – coupled with subsidised equipment. But this situation has changed very rapidly when first AT&T, the Sprint and Verizon followed T-Mobile into uncoupled instalment and/or leasing plans. 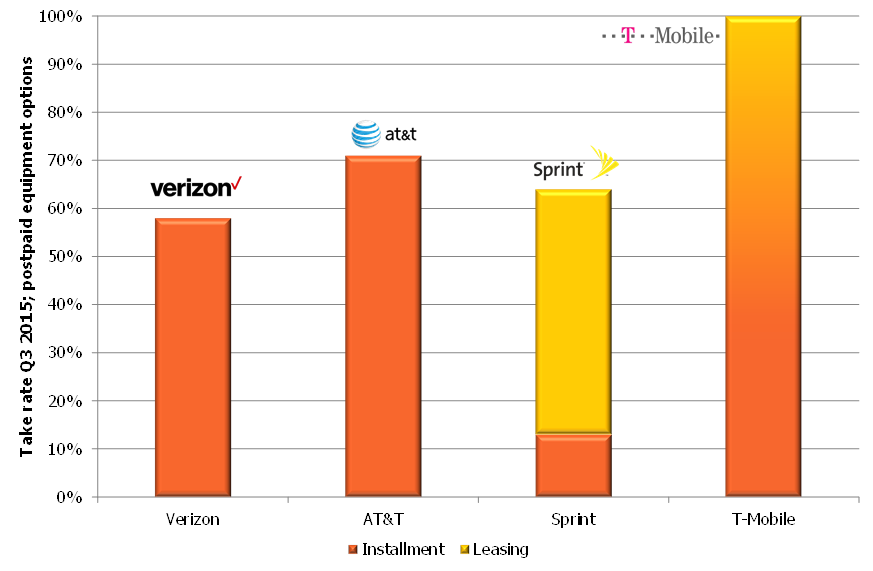 With these differences in mind, it’s also logical that T-Mobile has the highest share of revenues from equipment (22%), followed by AT&T (18%), Verizon (17%) and finally by Sprint (14%) where the high element of leasing gives a delay in equipment revenue recognition. (Since T-Mobile has added leasing options lately, this will affect also T-Mobile’s figures going forward).

On this note, the leasing model can be negative for operator cash flow. Yesterday, Sprint, made a sale and lease-back agreement covering a subset of leased handsets with a newly formed entity, Mobile Leasing Solutions, backed by Sprint’s owner Softbank. It will cost Sprint OPEX, thereby lowering EBITDA, but offload the balance sheet and improve cash flow.

But who sells for the most money?

Instead of looking at equipment’s share of revenue, let’s compare the absolute equipment sales volumes of the eighty operators (click graph to enlarge): 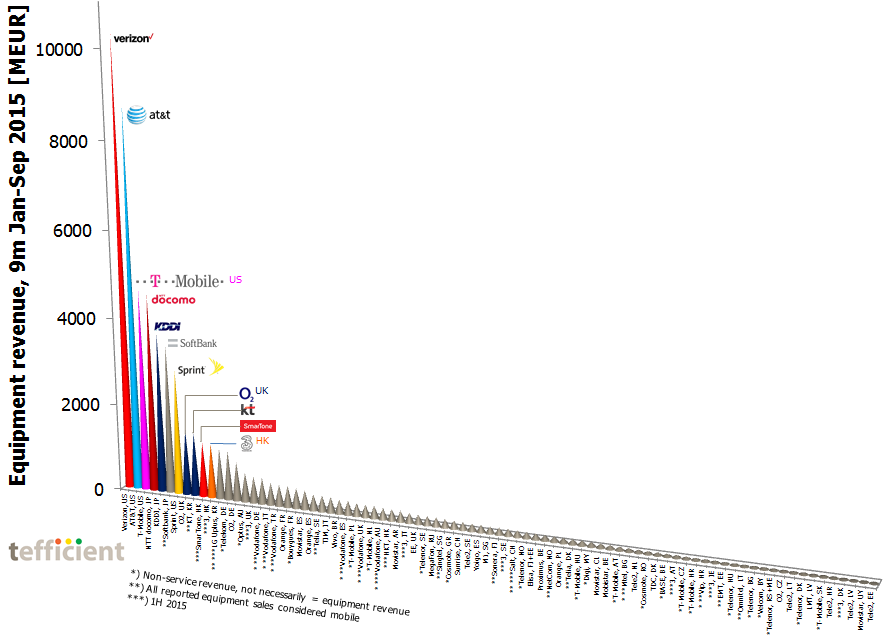 In the nine months of 2015*, Verizon had the highest absolute equipment revenue – over 10 billion EUR. AT&T follows with 8,8 billion EUR. T-Mobile USA is in third place, just ahead of NTT docomo.

*) For operators who only reported six months, we have multiplied the revenue with 1,5 to make it comparable

The two other Japanese operators KDDI and Softbank follow in position 5 and 6. Sprint has the 7th highest equipment revenue of these reporting operators. O2 UK is number 8 and KT from Korea number 9.

SmarTone and 3 from Hong Kong are number 10 and 11. It is really exceptional: SmarTone has 1,9 million customers whereas 3 has 2,9 million. The other operators with a similar equipment revenue are much larger: O2 UK 25 million, KT 18 million, LG Uplus 12 million, Telekom 40 million and O2 Germany 43 million customers.

A fundamental problem with selling equipment is the low or even negative margin associated with it: 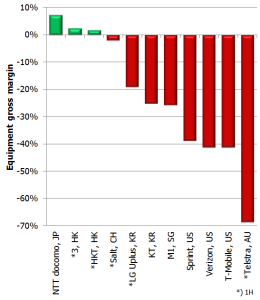 The operators in this graph belong to an exclusive group who report both equipment revenue and equipment OPEX. It’s therefore difficult to say if it’s representative for the whole industry. We however note that operators who are in the process of leaving the subsidy model have been able to improve the margin from deep red figures to less-deep-red figures.

Two of the reporting operators with positive margin are from Hong Kong – where the equipment revenue as described has expanded much lately.

But even if positive, it seems to be an unshakable fact that equipment sales dilute operators’ overall business margin.

The most rational would then be to – simply – not sell equipment. But operators with such a SIM-only focus tend to experience fluctuating churn and a significant price pressure.

We think that the dawning trade-in and trade-up models offer a way for operators to both satisfy customers’ thirst for new equipment while at the same time providing a possibility to monetise on it – and improve customer retention.

It’s important that the handsets aren’t allowed to overload the balance sheet of operators, though – or that off-balance sheet constructions cost so much that they eat up the benefits.