Once you pop, you can’t stop?

When the rollout of 4G LTE eventually got up to speed in Western, Central and Southern Europe, it wasn’t long until operators started to report that the rollout was more or less completed, using population coverage as the proof point.

Let’s look at the stats from 19 operators who reported 4G population coverage both for December 2013 and 2014: 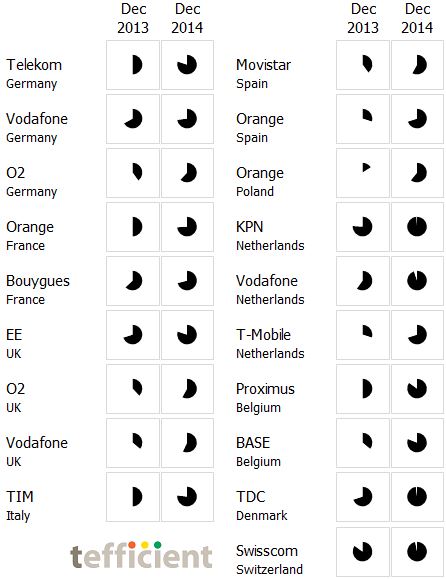 It went surprisingly fast. Or even suspiciously fast?

If we go back to the period 2011 to mid-2013, the collective manpower used by management of Western, Central and Southern European operators to motivate why 4G wasn’t needed exceeded what their engineering teams used installing 4G equipment. [That’s how it felt, at least.]

So if 4G coverage was such a quick thing to fix, why the push back?

In certain countries – e.g. the UK, Belgium, Finland and Norway – the answer is that operators waited for the right low-band spectrum to become available. In comparison to the 2100 MHz band used for 3G, the 800 MHz band available as one alternative for 4G propagates much further.

From a marketing perspective it’s great since it quickly colours a country map. 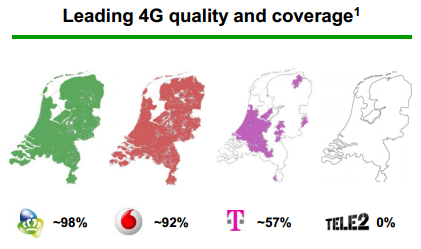 The picture above was used by KPN in its 4Q presentation 4 February. It has an external source, but was clearly added to visualise a leadership in population coverage and the significant distance to T-Mobile and Tele2 (who hasn’t yet launched as MNO).

T-Mobile’s CEO in the Netherlands, Mark Klein, in his comments to the 4Q results, seems to suggest that there’s a difference between coverage “the T-Mobile way” and coverage “the KPN/Vodafone way” (translated):

“We’re building a completely new network in the Netherlands based on the newest technology and an excellent set of frequencies. With 5000 antenna positions we’re offering the densest urban area coverage of all providers. We’re working on a high-quality network with the capacity to handle extreme data growth in the future.”

T-Mobile is the only of the four MNOs in the Netherlands without 800 MHz spectrum. Where KPN and Vodafone have been able to quickly “colour the country” with 4G by simply adding 800 MHz 4G to existing 3G sites, T-Mobile has had to be much more location aware, making sure their 4G sites are located close to where traffic is generated.

Without a doubt, coloured country maps are effective in marketing. But what is best for the customer experience? T-Mobile’s test results show that they provide the best network – where they cover. So if you are in those areas, T-Mobile’s rollout strategy is the right one; the network will be denser where it matters and where traffic is high. KPN and Vodafone’s 800 MHz cells provide too wide coverage where traffic density is high and will soon have to be redesigned and complemented with smaller, higher frequency, cells. Something which is also outlined, see e.g. this KPN release.

Newcomer Tele2 has – even though they have 800 MHz spectrum –also communicated that they intend to build a high-quality network with focus on indoor coverage and capacity where it matters most:

But coverage obviously always beats no coverage. Outside urban areas, KPN and Vodafone will currently provide a better customer experience on 4G.

Also the UK has interesting network dynamics. In a much questioned decision, UK regulator Ofcom allowed market leader EE to refarm 1800 MHz spectrum and use it for 4G even though Ofcom had not started the auction of the 800 and 2600 MHz bands originally intended for 4G.

This meant that EE could launch 4G 10 months before O2 and Vodafone. When the two launched 4G in August 2013, EE already had 60% population coverage. As shown in the pie chart graph above, O2 and Vodafone haven’t been able to close the gap.

O2 and Vodafone do have a benefit, though: They share the same 4G network and together they have 20 MHz spectrum in the 800 MHz band where EE (alongside ‘3’) only has 5 MHz. If O2/Vodafone’s intentions were to “colour the country”, the rollout could potentially be quick. But with a reported population coverage of 57% (Vodafone) and 58% (O2) – not meeting the previously communicated 60% target for 2014 – this seems not to be the strategy. EE is now on 80%.

A recent blog post by Vodafone UK, quoting CEO Jeroen Hoencamp, might suggest that Vodafone UK follows a logic similar to T-Mobile in the Netherlands:

“For us it’s about having the strongest network. One of the things that makes us different from others is that we have our ‘low band spectrum’. What that means is that our 4G is on a lower frequency, which travels further and deeper indoors.”

Clearly addressing the only weakness in EE’s 4G position – the lack of 800 MHz spectrum – Jeroen Hoencamp suggests that population coverage isn’t that important:

“It’s not about who’s got the most coverage. It’s more about having the strongest signal. We’d love to expand the network faster, but it’s about doing it right first time; I’d rather do it at the pace we’re doing and get it right, than try to go faster and build a thin and flimsy network.”

Do Mark Klein and Jeroen Hoencamp say what they are expected to say? Indirectly criticising competitors with wider population coverage of having built “thin and flimsy” networks?

But they have a point. Outdoor population coverage numbers – and the associated national coverage maps – are marketing. What really matters is the customer experience. Data traffic is to a high degree generated indoors and strongly concentrated to urban areas.

With a growth rate in mobile data traffic of around 100% in both the UK and the Netherlands 2014, capacity will very soon be the issue which sets the customer experience, not coverage.