Orange Switzerland (which since 2012 isn’t owned by Orange Group) is just about to be sold to Xavier Niel’s private holding company. What makes it interesting is that Niel is the person behind Iliad, the company who operates under the Free brand in France. 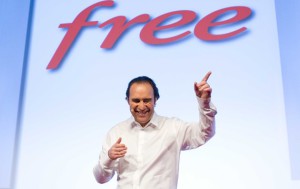 Free has disrupted the French telco market twice. The first time when Free launched its 29,99 EUR triple-play offer including fixed broadband, TV and telephony – at a price significantly lower than the market price at that time. The rest of the market did eventually copy Free. Today, Free has more than 5,7 million fixed customers in France.

The second time was in January 2012 when Free – after loud protests from competitors, politicians and unions – launched mobile. For 19,99 EUR a month, French customers could get a generous bundle of voice, messaging and data – at a price significantly lower than the market price at that time. The rest of the market did eventually copy Free. [Yes, they should have been warned]. In less than a year, Free gained 5,2 million mobile customers. Today the figure is above 9 million.

Since the launch of Free Mobile, Orange‘s employee base (for the local French business) has gone down with 5415 people [to September 2014]. SFR reduced its employee base with 1028 people while Bouygues Telecom reduced with 778. [These two figures are only up to December 2013 since employee numbers haven’t been reported for 2014 yet]. In total, the three incumbents have let go of at least 7221 people (net).

Iliad has recruited 1221 employees [net, again just up to December 2013] – which is significant, but by now means compensates. 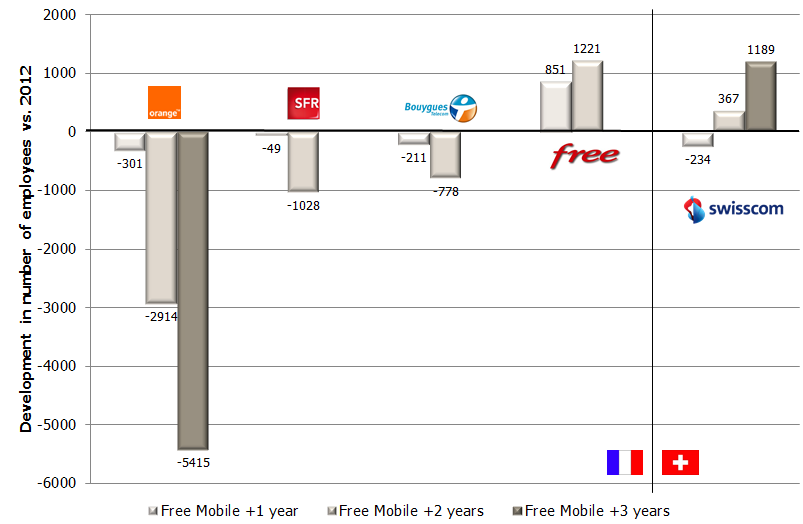 If Xavier Niel is thinking about “doing a Free” in Switzerland, will it have the same effect on Swiss telco headcount? As seen in the graph, Swisscom, the incumbent, is expanding headcount. From a high level: Swisscom has 13285 employees in its Swiss business.

A comparison with other integrated incumbent operators in similar-sized European countries shows Swisscom’s large employee base.

Only A1 in Austria has a similarly low employee productivity level – 1,1 employees per 1000 customers (fixed or mobile). Also Swisscom’s two local competitors are significantly more productive. [Orange is essentially mobile-only, but Sunrise is an integrated operator like Swisscom].

Since Switzerland is one of Europe’s most expensive countries when it comes to employee costs the finding is surprising. 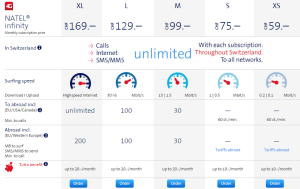 How can Swisscom afford such a high employee base? The answer is revenue. Switzerland is expensive and Swisscom is no exception: Where Free’s most expensive mobile plan in France is 19,99 EUR per month, Swisscom’s most expensive XL plan is  160 EUR [169 CHF] per month. Like all Swisscom plans is has unlimited data volume (you instead pay for data speed), but even Swisscom’s cheapest XS plan, with only 0,2 Mbit/s throughput, is 56 EUR [59 CHF]. Free’s 19,99 EUR plan is by no means ungenerous; it includes unlimited calls not only to France but to 100 countries. And it includes 20 GB of 4G data.

So given its price level, Swisscom has reasons to be worried. Xavier Niel has a track record of successfully using price disruption as a competitive weapon.

When Free started, its mobile network was sub-standard and the end-user experience could only be kept up through costly national roaming (on Orange France’s network). With Orange Switzerland, Xavier Niel has a better starting position: Orange has “very good” network on par with Swisscom and Sunrise according to the Connect test. In September Orange had 90% population coverage on 4G.

tefficient is currently examining the interest of Swiss and Austrian operators for a Switzerland & Austria specific operator benchmark.