The economic crisis put significant pressure on the Spanish telcos. Telefónica (Movistar) and Vodafone each lost around 4 millions SIMs in the past two and a half years. Orange and Yoigo have fared much better. Yoigo, with its no-frills low cost profile, grew subscriber base from 3 to 4 million at the same time. But suddenly – in Q1 2014 – Yoigo’s total revenue fell 26% quarter-on-quarter.

In TeliaSonera’s new reporting format – implemented Q2 2014 – we could see why total revenue fell: Equipment revenue declined 53% quarter-to-quarter. We could also see that in Q4 2013, 40% of Yoigo’s total revenue stemmed from equipment sales. By any standard, that is high. 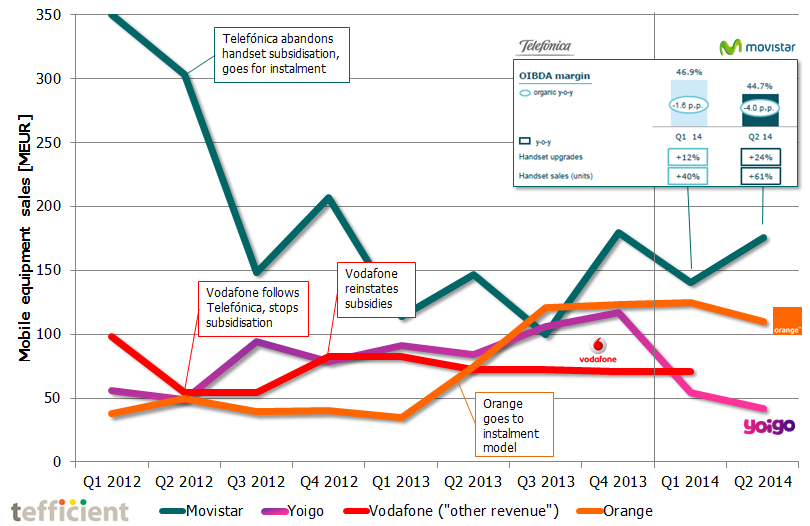 Why was it so high? In March 2012, Telefónica decided to abandon handset subsidisation altogether. It had an immediate negative impact on Telefónica’s equipment revenue: From Q2 to Q3 2012, equipment revenue fell from 300 to 150 MEUR (see graph). When Telefónica didn’t any longer discount customer equipment, customers bought it elsewhere. Vodafone followed the market leader and stopped subsidisation as well. Orange did not – and had a few easy quarters during which it churned over customers from Telefónica and Vodafone. Yoigo’s differentiation was instead its low service prices. Many cost-aware mobile users went to Yoigo for this reason, even if it meant that they had to pay the full price of a handset. Yoigo’s service revenue was low, but it was compensated by an increasing revenue from equipment sales…

…until Telefónica decided that they saved enough. The inserted frame in the graph shows that Telefónica grew handset sales 40% in Q1 2014 and 61% in Q2. At the same time, Telefónica’s margin fell. Equipment revenue expanded, but not in line with the number of handsets sold. All this together signal handset subsidisation. Telefónica: back in the game. Yoigo: equipment sales halfed.

TeliaSonera was for a long time open about their interest in selling Yoigo. With the improved results 2012 and 2013, that message changed. But after the Q1 2014 surprise, TeliaSonera put Yoigo back on the transfer list. All of Yoigo’s revenue expansion 2012-2013 was based on hardware sales. A weak foundation when the market leader changes direction.