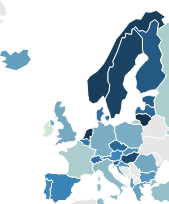 The graphs below compare the 4G availability in Europe as reported by OpenSignal (left) to the country population (right). Click to enlarge.

The European country with the highest 4G availability is Lithuania with 85% (#3 globally) followed by the Netherlands with 84% (#5 globally).

In the graphs we have highlighted the five largest countries in Europe, normally referred to as EU5, in blue. With the exception of Spain, they are cluttering in the lower part of the left-hand chart.

Logically it should be the other way around: It should make more sense to invest in countries where the number of customers – and thereby revenue – is high.

But maybe the EU5 countries are geographically larger? Let’s replace the previous right-hand graph with the population density.

In contrast, half of the countries in the European top 10 of 4G coverage – Lithuania, Norway, Sweden, Finland and Latvia – all have very low population density.

An attempt to correlate the 4G availability with the number of networks per country didn’t give anything. To exemplify, Norway is in the 4G coverage top with only two commercial networks. Netherlands in also in the top but has four networks – the same number as bottom-ranked France and Italy. There’s no support for the claim that consolidation would increase investments – and no support for the opposite.

Until we find a better explanation, we have to attribute the position of the EU5 countries to a lack of ambition – by the operators or the policymakers. When it comes to Italy and the UK this lack of ambition could be explained by planned mergers causing operators to “wait and see” before investing. (As we know, the merger in the UK between ‘3’ and O2 wasn’t approved whereas the merger in Italy between ‘3’ and Wind was).

Tefficient’s data usage analysis (soon to be updated with 1H 2016) shows that the EU5 countries are found in the low-usage tier of Europe: