But where most incumbents regard copper-based DSL technologies as a fallback for areas where fiber-to-the-home (FTTH) or fiber-to-the-building (FTTB) deployment isn’t financially feasible (or not yet rolled out), a few seem to be determined that copper is it.

BT and Deutsche Telekom are the two camp leaders.

But whereas BT has taken a lot of beating for its stance, facing a “Fix Britain’s Internet” campaign paid by competitors TalkTalk, Sky, Vodafone and ‘3’ demanding a separation of BT’s infrastructure arm, Openreach, DT has received less criticism for its strategy. 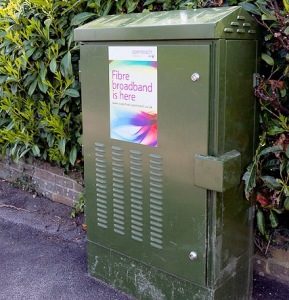 In what we always regarded as an attempt to mask an unpleasant truth, BT and DT both report copper-based VDSL customers as “fiber”. Deceivingly, BT is also using the “fibre” word when promoting its broadband products – which can only deliver up to 76 Mbit/s on its best, download, link. When selling, DT is actually calling VDSL for VDSL; the company only groups VDSL with FTTH and dubs it all “fiber” when it reports:

The graph is fetched from the Q3 presentation of Deutsche Telekom: It uses the “fiber” words eight times – but it’s only twice explained as “Sum of all FTTx accesses (e.g.: FTTC/VDSL, Vectoring and FTTH)”. We have on several occasions asked DT to break out the FTTH/FTTB figures but been told that the company has decided not to.

But all this is “as usual”. What triggered this was this statement:

As telecoms analysts, we react when we see misleading statements. Strictly speaking, it’s not even true.

Even with DT’s copper-centric definition of “fiber” – including VDSL – BT is larger than DT: 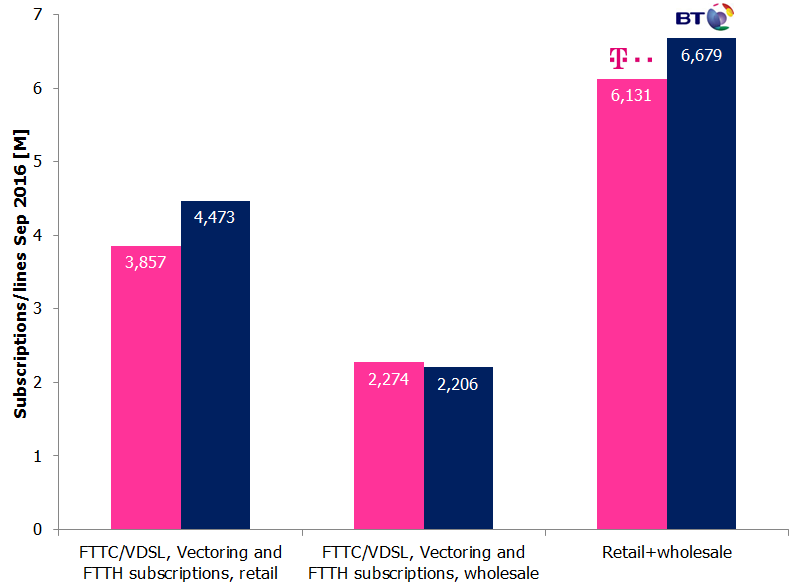 Already at the day of DT’s Q3 report (10 November), we pointed this out directly to DT, but got no reaction. DT hasn’t corrected its statement. So we have to: DT isn’t the European leader.

Let’s now review the more deceptive part of DT’s leadership statement: When the company uses a definition of “fiber” that makes DT look better than it would if using the common industry definition.

Germany’s national telecom regulator is called Bundesnetzagentur. Similarly to its colleagues in Europe, the Bundesnetzagentur is in its market reports – unlike DT – separating DSL from cable broadband (HFC) and FTTH/FTTB. Since the last available statistics in Germany are from December 2015, we have in the graph below used that date as comparison point for the fixed broadband distribution per technology: 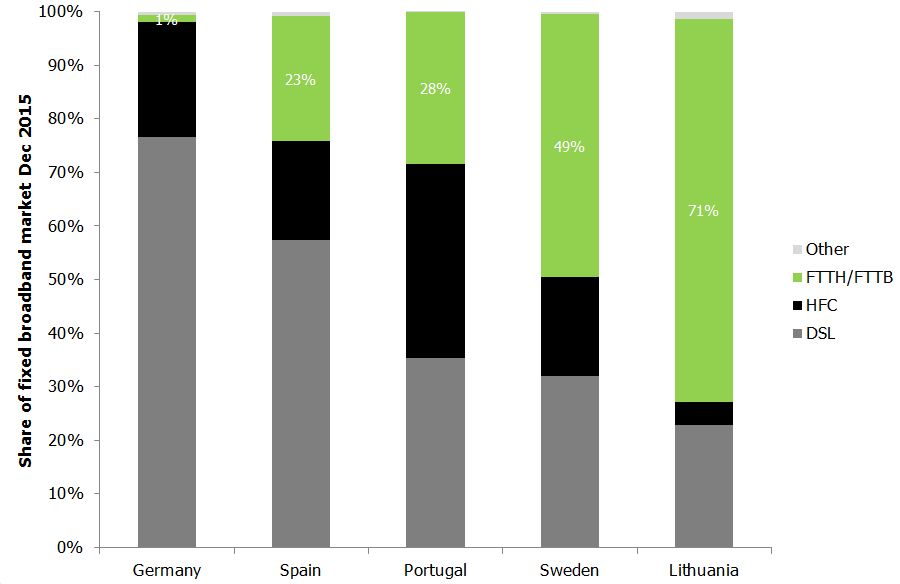 The comparison countries are not randomly selected: Spain, Portugal, Sweden and Lithuania are some of the actual fiber leaders in Europe.

In December 2015, 1.3% of the German fixed broadband connections were either FTTH or FTTB. In comparison to Lithuania’s 71%, this is nothing and DT’s leadership claim appears hollow. 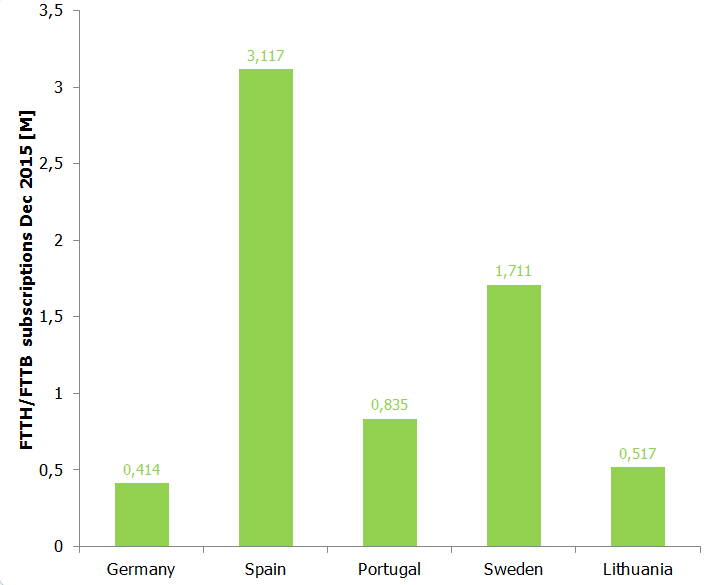 Since Germany apparently isn’t the FTTH/FTTB leader of Europe, which country is? In absolute numbers, it’s Spain. 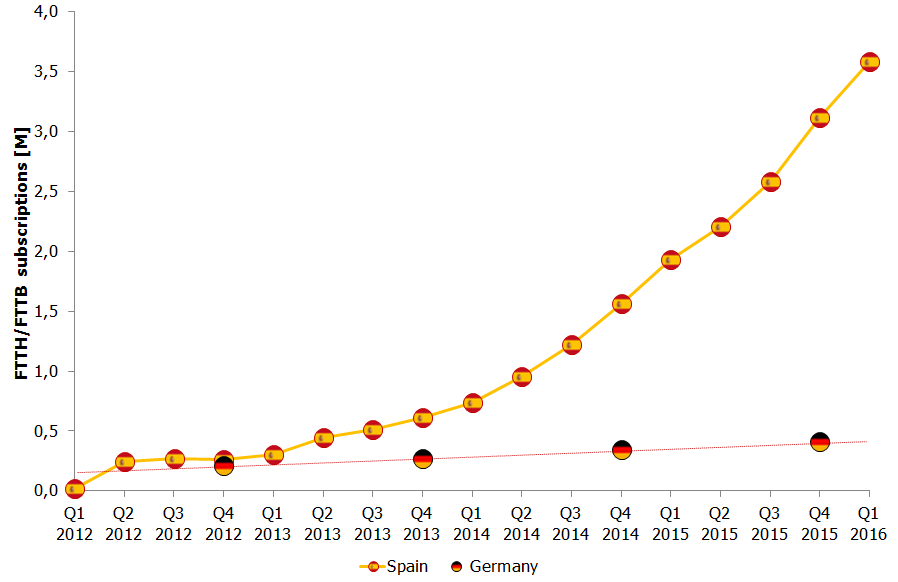 To question DT’s claim with more facts, let’s compare Germany with the two – much less populated – countries of Sweden and Lithuania. Sweden first: 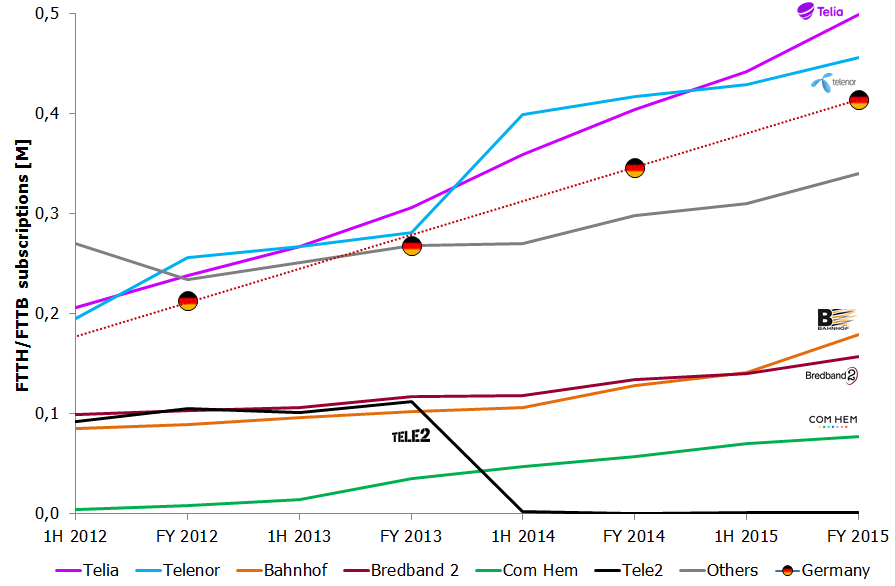 Sweden is predominantly an open fiber market where the network ownership is separated from the ISP. Even though this results in many players and a scattered market, the two largest ISPs over FTTH and FTTB in Sweden, Telia and Telenor, both individually have more FTTH/FTTB subscribers than the whole of Germany including DT. 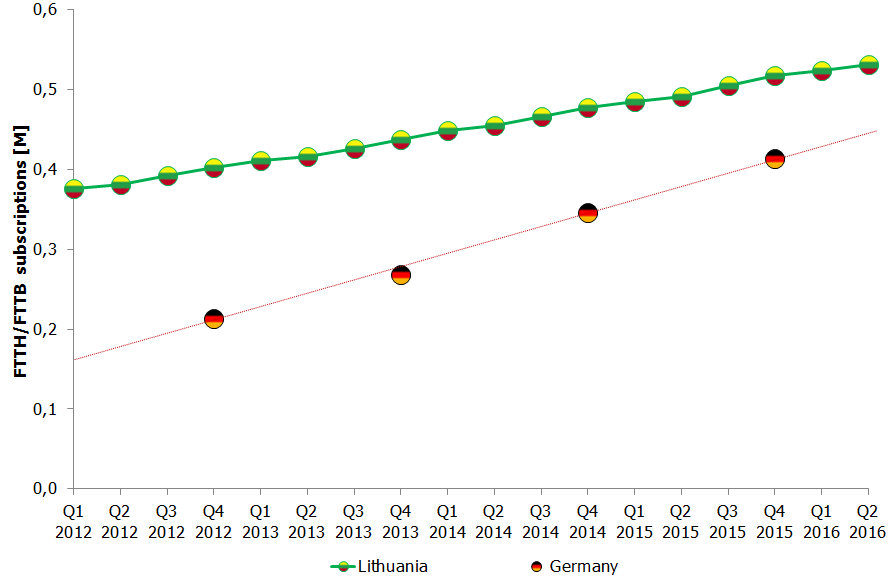 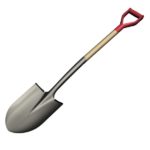 Next time, check facts. Don’t try to mislead those that read your reports. And, most importantly, start digging for fiber.

In this business, leadership is created with a shovel.