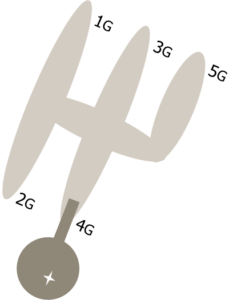 This is tefficient’s 21st public analysis of the development and drivers of mobile data.

Mobile data usage is still growing in all of the 39 countries covered by this analysis. But there are two countries that stand out – China and India. In the first half of 2018, these two ‘developing’ nations have overtaken several mature markets when it comes to average data consumption per subscription. The growth is incredibly fast and driven by 4G.

But China and India aren’t yet challenging the top – where the two unlimited superpowers, Finland and Taiwan, still reign.

Data-only remain a key driver for overall usage and new figures from Austria and Finland add insight to the extreme usage pattern of fixed wireless access. Since the baby steps on 5G are taken in that FWA segment, it’s an interesting pointer to the future.

With the fourth gear fully engaged, the fifth gear is in reach.

Download analysis: China and India shift to 4th gear – leave many mature markets in the dust