A year ago, we published “Finland: The land of three thousand Megabytes“. And it must have hit a nerve since it is – still today – one of our most read posts.

46% of Finnish SIMs are what the Finnish NRA calls “pay monthly subscribers with unlimited data“.

And when there are no caps or allowances hindering 46% of the Finnish devices to fully embrace mobile data, the usage growth continues: The average Finnish SIM consumed 90% more data in 2015 than in 2014. 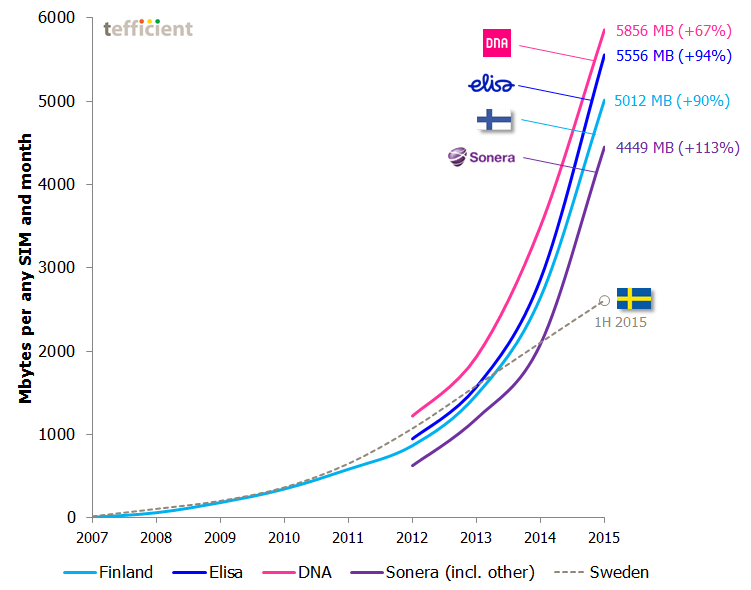 Since both Elisa and DNA report total mobile data traffic, we can with some certainty calculate the last Finnish operator, Sonera’s, traffic. [This is likely exaggerating Sonera’s traffic a bit since there are MVNOs, but since MVNOs are few and small in Finland, we make the approximation that what isn’t Elisa or DNA is Sonera].

With 5.9 GB per any SIM and month, DNA has the highest average usage. Not only in Finland, but most likely in the world. Elisa is catching up on DNA with an annual growth rate of 94% compared to DNA’s 67%, though. Sonera is last of the three, but its growth rate (113%, subject to the MVNO assumption) is the highest.

But isn’t mobile data traffic growing like this everywhere? No, not in mature markets at least. To compare, we have added Sweden, current number 2 in the world when it comes to average data usage.

The comparison isn’t perfect since the Swedish NRA hasn’t yet reported full year 2015 figures. But still, the Swedish usage – high by any standard (just not vs. Finland) – has had a linear development whereas Finland’s growth has been exponential. The data-only penetration is as high in Sweden as in Finland, but unlimited offers haven’t been available in Sweden for years.

Are Finnish operators right and the rest of the world wrong?

But since Finnish operators monetise mobile data on throughput tiers (not volume), a lot of this growth in service revenue comes from customers upgrading from 3G to 4G speeds.

According to the Finnish NRA, it’s just 37% of all postpaid customers that subscribe to 30 Mbit/s or higher – which we roughly can categorise as “4G”. 63% of postpaid customers are still on “3G” speeds below 30 Mbit/s. And since a 3G-to-4G upgrade in Finland roughly translates to 5 EUR more per month, the upgrades drive service revenue. A positive trend which, most likely, will continue for the rest of 2016.

If you already have 4G with 50 Mbit/s and unlimited data, how likely are you to upgrade further?

That end-users love the unlimited data message is obvious – see this commercial from Elisa:

But before throwing your mobile data monetisation model overboard, consider the longer-term effect on your revenue.

There are also other models than volume and speed – see our “Save, borrow, be rewarded with, give away Gbytes. The new currency” piece from November.

In the mean time, we continue to be astonished with how highly ranked the Finnish operators are – even when we compare total traffic in terabytes. 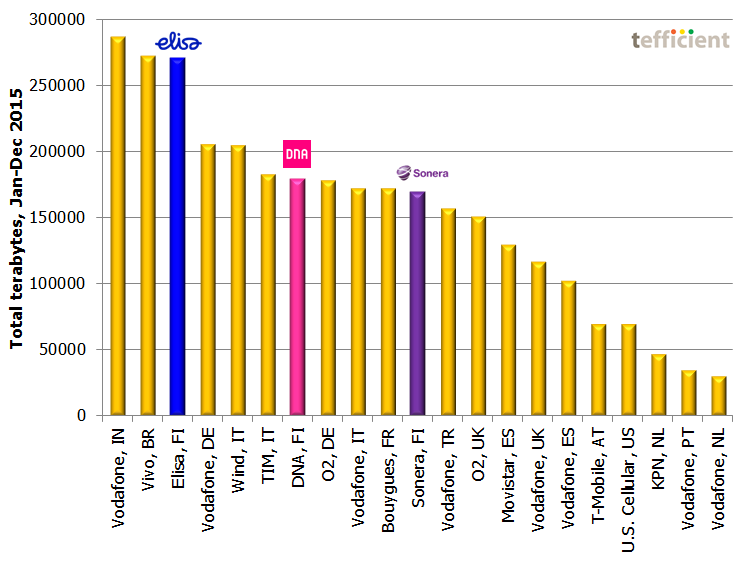