This is Anders. Like any other Swede, he’s a keen user of mobile data and likes to spend time making sure he gets as much data as possible for his money.

He frequently tethers his iPad or his Mac to his iPhone (yes, he is Swedish) to stream Netflix, HBO, Viasat and SVT Play when out and about. He’s also more or less constantly on Spotify. This behaviour means that in a normal month he uses about 6 GB of mobile data, about twice the Swedish average.

But Anders is part of a family. And during their vacations, Anders’ smartphone is used as a Wi-Fi hotspot not only by himself, but also by the rest of the family. This means that his annual mobile data consumption is unevenly distributed:

The first peak happens during the family’s skiing week, the second during the month-long remote summer house vacation.

Anders noticed that Telia, as the first operator in Sweden, launched rollover data 1 October. When reading about it, Anders realised that this could potentially be good for him given the seasonal variations in the mobile data usage.

Telia’s rollover data, Surfpott, is available for new and old consumer customers on the 12, 24 and 40 GB per month plans, but not for customers on the 0,5 and 4 GB plans. (All plans include unlimited voice and messaging). The unused data of previous month is saved into a savings account – with gigabyte as the currency. In Telia’s implementation, unused data doesn’t expire, but no more than 100 GB can be saved.

At tefficient, we consider rollover data an important element of Nonstop Retention: A savings account full of data will be hard to leave behind – which a customer needs to do if he/she churns. It’s also considered fair to be able to keep data once paid for.

Anders knew he had to commit to Telia’s 12 GB plan for 399 SEK per month to get the rollover. Given his normal usage of 6 GB, it’s a bit high of course, but Anders’ intention is to be able to save up data for the vacation periods.

And it proved to worked out very well: 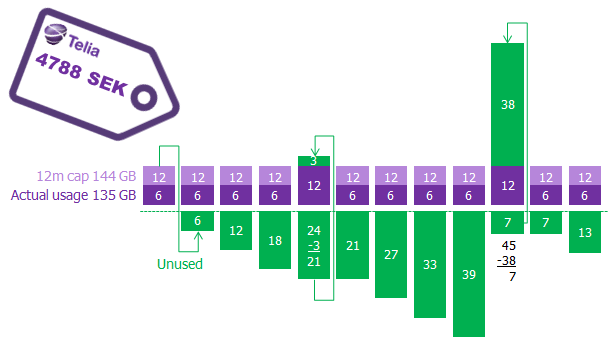 If he starts the plan now, he has easily saved up enough unused data to manage the first (skiing vacation) peak of 15 GB. He simply takes the extra 3 GB from the savings account.

The summer holiday peak of 50 GB is managed as well: At this point in time, Anders would have 45 GB in his savings account but since his normal monthly allowance is 12 GB, he just needs to withdraw 38 GB.

All this to a cost of just 4788 SEK per year. Anders is happy: In order to reasonably match his peak usage, Anders is currently on Telia’s 40 GB per month plan (which he during the summer vacation month still need to complement with two 5 GB top-ups of 199 SEK each) for a total cost of 7586 SEK per year. By introducing rollover data, Telia just lowered his mobile bill by 37%.

But before logging into “Mitt Telia” to downgrade his plan, Anders remembered having seen Tele2 advertising about more data for the money.

For almost the same money as Telia’s 12 GB plan (which Anders would downgrade to), Tele2 would give 50 GB per month (still, of course, with unlimited voice and messaging). But without rollover. The 50 GB allowance would be sufficient even for that peak month, though.

Anders couldn’t make his mind up. If he would have had a more evenly distributed data traffic, he could use up to 600 GB per year with Tele2 compared to just 144 GB with Telia – for the same money. On the other hand, he doesn’t like the feeling of 44 GB being confiscated every normal month.

Sofie, Anders’ wife, proposed that he should investigate if top-ups couldn’t solve the peak months. And so he did.

If Anders would downgrade his plan with Telia yet a step, to 4 GB per month, he would first of all lose the rollover. Cost-wise, it wouldn’t be good either since Anders would have to top-up every single month – since Telia’s top-ups expire after 31 days. Consequently, this option would almost become as expensive as his original 40 GB plan. So for him, the 12 GB option with rollover would still be the best of what Telia offers.

When checking Tele2’s top-up options, Anders found out that in contrast to Telia, Tele2’s top-ups roll over – without limits or expiry. It didn’t have an impact on his price calculation, but made Anders wonder why he couldn’t have both.

But Sofie’s hint was a good one: If instead relying on top-ups to cover the extra data need in the peak month, Anders could go with Tele2’s 20 GB per month plan and save an additional 303 SEK per year on the previous Tele2 price: Tele2 won with 4473 SEK per year.

After much hesitation, Anders still favours Telia, though. Partly because the data allowance can be shared with other Telia SIMs in the family (only need to convince all kids to churn). Partly because Telia through Telia Familj gives a multi-user discount (again, they should churn). But mainly since with Telia, Anders could continue to have the discount on Spotify Family.

One of his kids then told him that 3 started to zero-rate Spotify in Sweden. Anders decided to do the maths on that one another day. Could 3 really be the best option? (He’s now quietly wishing for Telenor not to come up with anything new).