It is based on 59 billion measurements and shows that 4G LTE speeds in the fastest countries are in a holding pattern where they don’t increase. The availability of 4G LTE is still improving though, and five countries have now joined the 90% of time club. Three months ago, that club only had two members.

The image above (click to enlarge) highlights the top five countries in 4G availability and 4G speed respectively.

The leading position of South Korea is nothing new; the country has been the global 4G LTE leader from the start. But it is no longer in the absolute top when it comes to 4G speed. This is what OpenSignal says:

Until this report, South Korea had consistently ranked in the top 2, vying for the title of fastest 4G country with Singapore, but we saw average 4G speeds in South Korea fall from 45.8 Mbps to 40 Mbps. While that speed still ranks among the fastest in the world, it may be an indication that South Korea’s vaunted LTE-Advanced networks may be showing their first signs of capacity constraints. 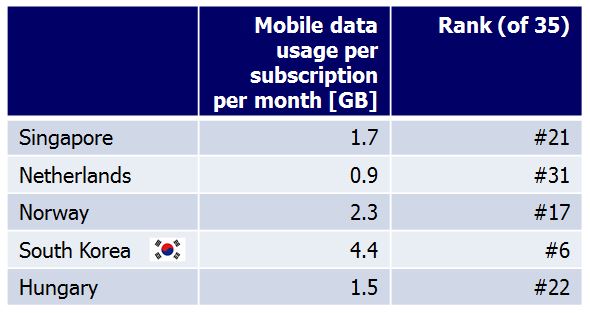 How fast would the networks of the other four countries be if they had the South Korean usage? If they had 2 to 5 times higher load? Nobody could say exactly, but “much slower” is a good guess. In mobile networks, the capacity is shared between the users.

We were recently interviewed for an article by NRK, the public service broadcaster in Norway. NRK uses our mobile data usage and revenue analysis to point to the obvious difference in how mobile data is priced in Norway vs. the rest of the Nordics. 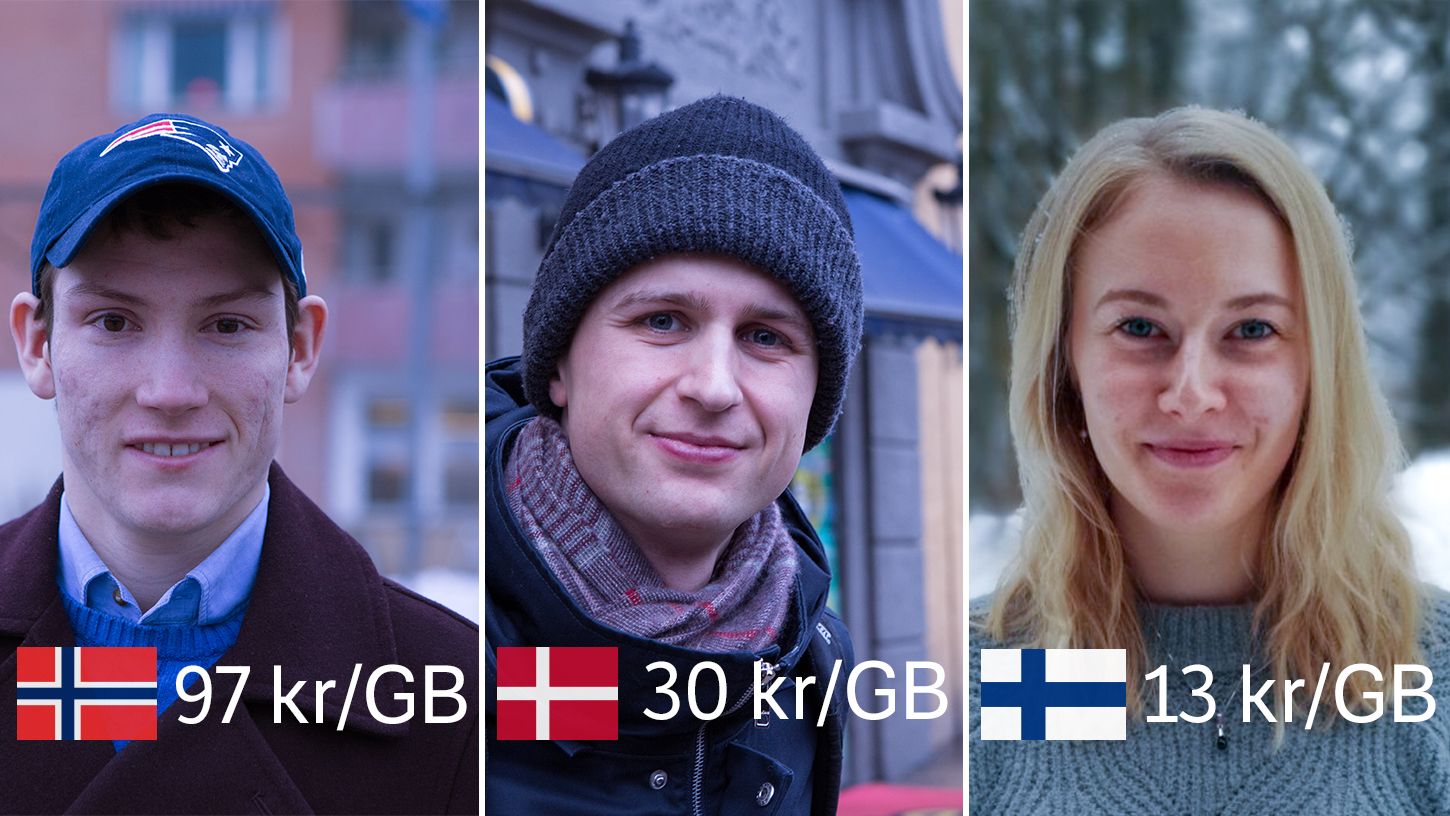 Our view, as expressed in the article, is that the Norwegian situation is the result of fifteen years of political and regulatory negligence: Norway has repeatedly failed to establish a strong enough third mobile operator – and when it eventually was on the verge of getting one, it didn’t allocate a 4G license to the strengthening third operator Tele2, but to a unknown company without a mobile network. The government got about 30 MEUR more, but the market competition suffered when Tele2 sold out and left the country following the licensing.

In NRK’s article, the high mobile data pricing in Norway is explained by an excellent quality of the Norwegian networks. As shown by OpenSignal’s figures – with Norway ranking third both in 4G availability and in 4G speed – the quality claim has merit. Our point here is that Norway – alongside the other low-usage speed winners Singapore, the Netherlands and Hungary – so far has an easy job delivering 4G speed if compared to South Korea, see the highlighted box in the load vs. speed graph below: 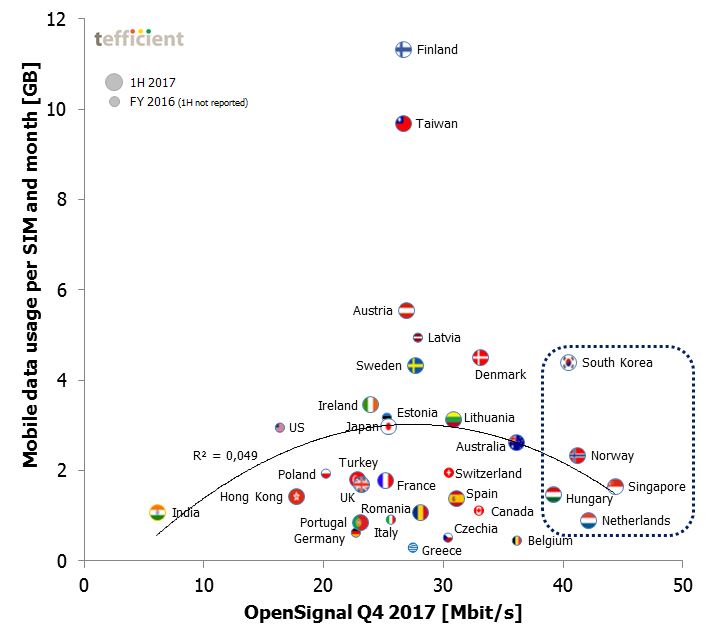 When the Norwegian usage doubles to a Korean level (or five-folds to a Finnish level), the speed will be reduced. 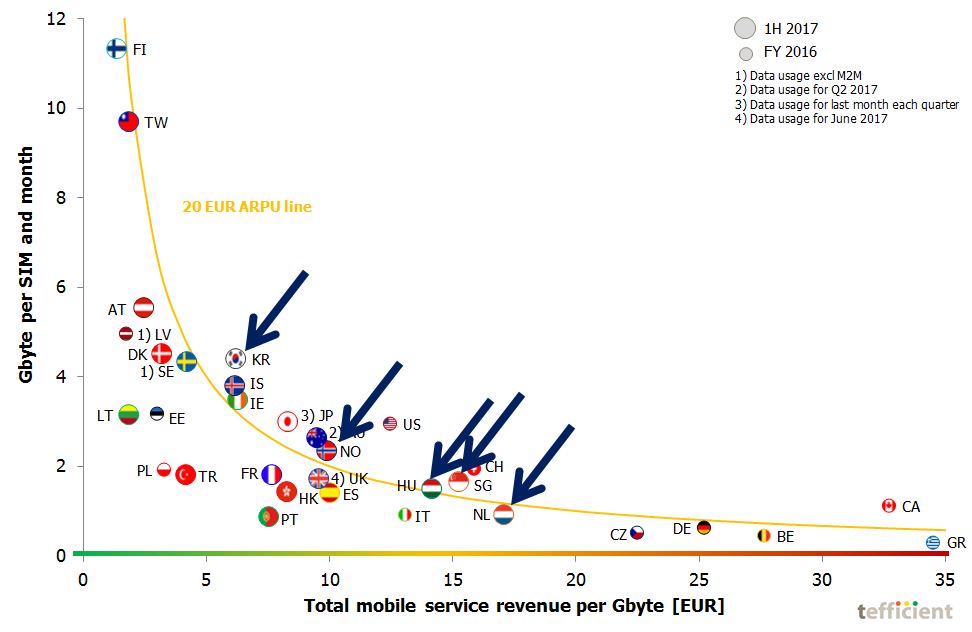 In the graph above – from our latest country analysis – we have pointed out the five fastest 4G LTE countries in OpenSignal’s report. In the Netherlands, Singapore, Hungary and Norway, operators make much more revenue per gigabyte than in South Korea. The operators in the Netherlands, Singapore, Hungary and Norway don’t charge more because the networks are fast; the networks are fast because the operators charge more. Mobile users consume less data when it’s expensive.

A country that has no reason to be proud of its mobile infrastructure is Germany. We have highlighted the dire situation of Germany many times. But very little seems to happen. 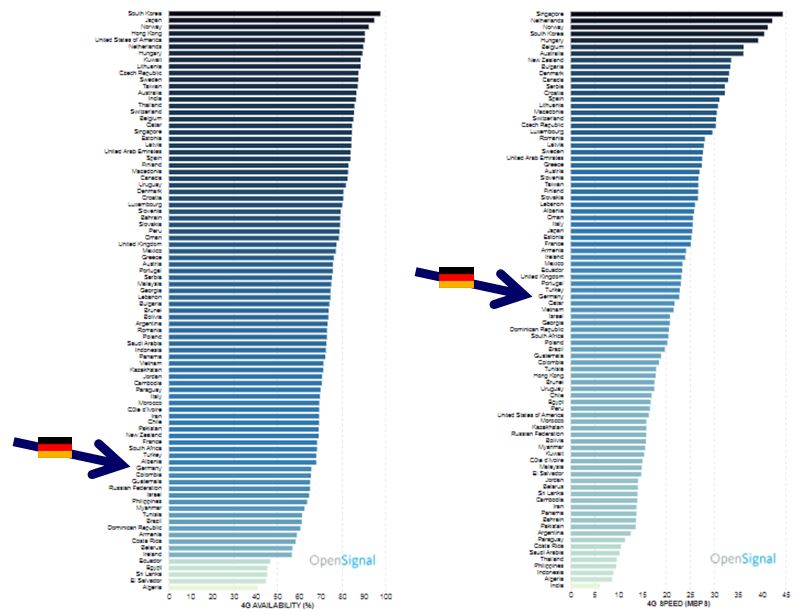 Germany is between Albania and Colombia in 4G availability (left). 4G speed (right) is a bit better. [Yes, Germany is another low-usage country with high revenue per gigabyte]. In 4G speed, Germany ranks in between Turkey and Qatar.

Finally to a country where smartphone users now experience 86% 4G availability: India. This is the 14th highest 4G availability in the world. Led by the disruptive entry of the 4G-only operator Jio, Indian operators are apparently running their legs off building 4G coverage.

As shown by our latest operator analysis, Jio is now one of the operators in the world with the highest mobile data usage with close to 10 GB per subscription and month in the third quarter of 2017.

But if the 4G availability is high, the 4G speed is not.

With an average 4G speed of just 6 Mbit/s, India ranks last of the 88 countries reported by OpenSignal. 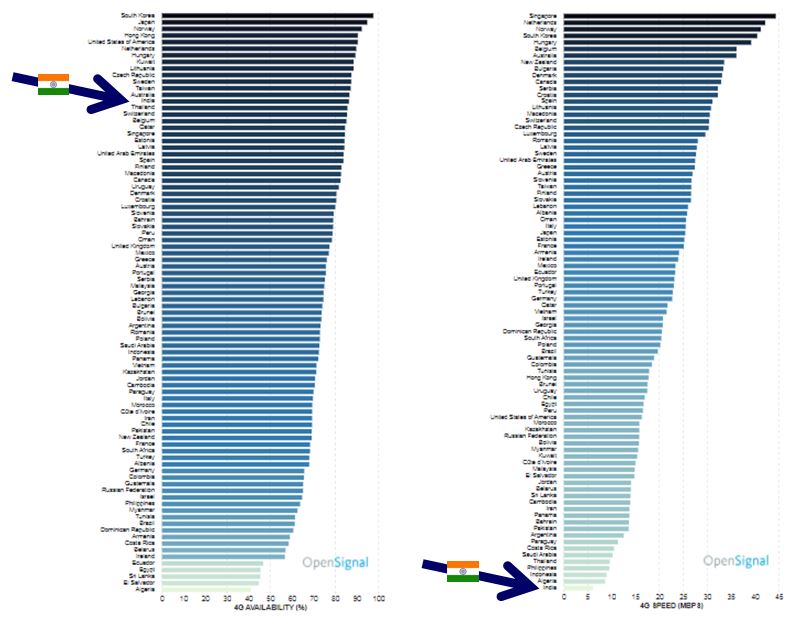 Read more about the relationship between load and speed here. This Nordics-focused blog is also addressing this.