The four largest wireless carriers in the US – Verizon, AT&T, T-Mobile and Sprint – all claim that they have (essentially) abandoned the two-year-binding-contract-with-subsidized-phone model.

At least in the consumer market; the model is still around in the business market.

T-Mobile boasts that they led the American market away from binding contracts and handset subsidy.

So let’s look at this fresh example: After the iPhone 7 introduction yesterday, T-Mobile started to offer new and existing customers a free iPhone 7 32 GB if they trade in a working iPhone 6 (or newer): 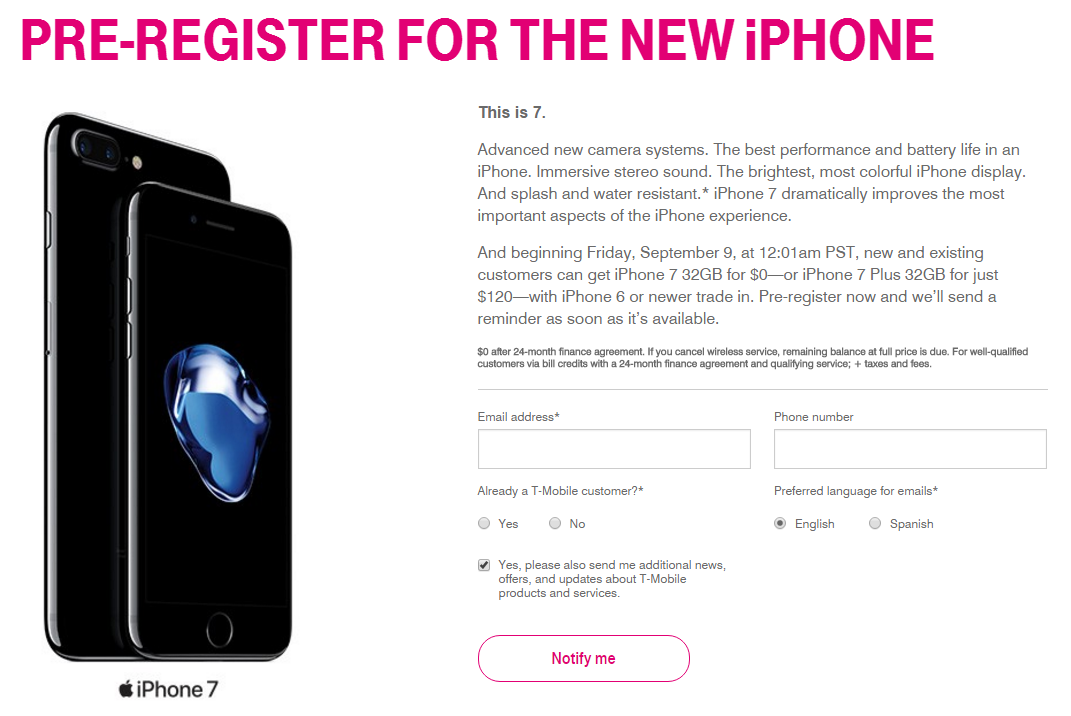 And then this fine print: “If you cancel wireless service, remaining balance at full price is due”. This is valid for a period of two years.

Isn’t that a two-year binding contract?

Sprint has exactly the same promotion as T-Mobile:

Again a free iPhone 7 if you trade in a iPhone 6 (or newer). Against an obligation to stay for two years.

Update: Also Verizon, following the initial version of this post, now has a free iPhone 7 offer since the company pays “up to” 650 USD for a iPhone 6 (or newer) trade-in – the same as the price of an iPhone 7 32 GB. Yes, a two-year contract required.

If we turn to the reported figures from the four carriers we get the idea that phones de facto were subsidized already before these latest promotions: 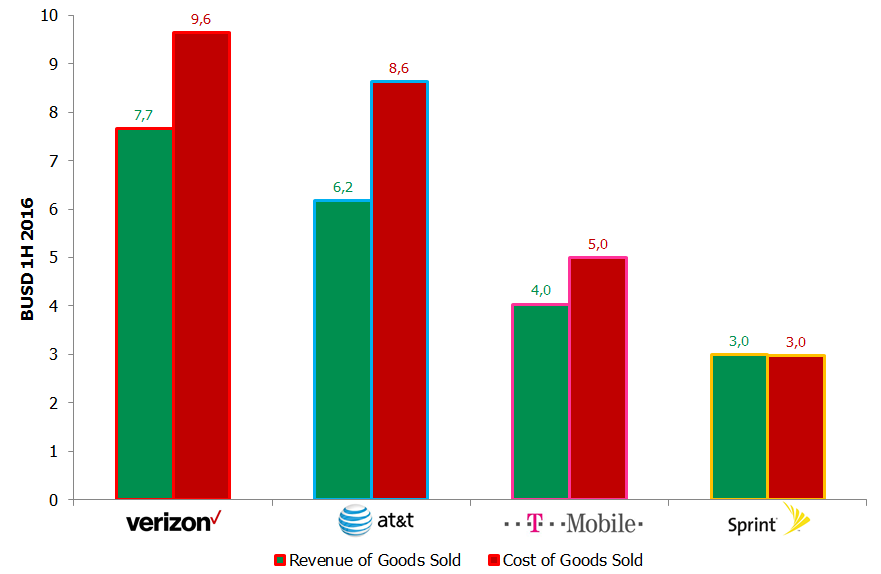 In 1H 2016, Verizon, AT&T and T-Mobile all reported higher cost of goods sold than revenue of goods sold. To simplify a bit (there are a few other cost items, like shipping and insurance, included in cost of goods sold), this means that they paid Apple and other suppliers more for the phones than what they charged customers.

Note: AT&T’s cost (but not revenue) is reported only for the whole AT&T group, meaning that it’s likely somewhat overstated since also Mexico is included in the cost

Sprint‘s reporting appears to show a balance between cost and revenue. But Sprint has the most complex setup of the four: A majority of the financed equipment sales volumes originated from leasing plans – not from equipment installment plans like the other three. 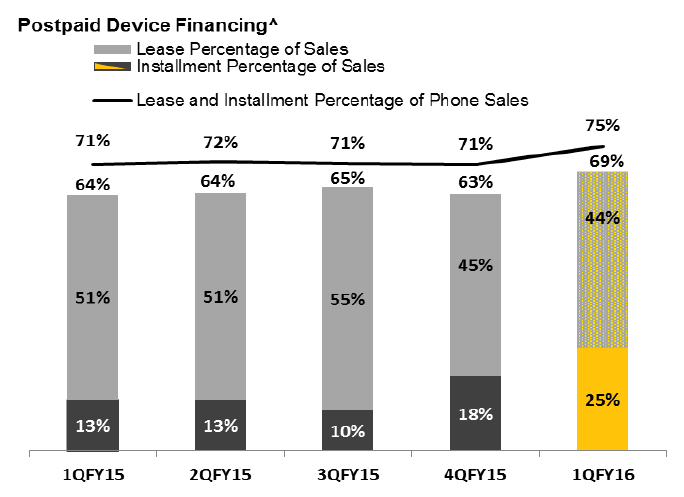 Phones on leasing plans have been treated as a capital expenditure meaning that the cost of goods sold (which is OPEX) is lowered with the same amount, hence the seeming balance for Sprint in our revenue vs. OPEX graph. The red cost silo in our graph above should have been 1 BUSD higher to be comparable. Since lease revenues are recognized over the lease term, future revenues of goods sold should be positively affected, though.

Through Sprint’s arrangement, phones came to represent a significant share of Sprint’s CAPEX – 45% in 1H 2016. With a need to invest in its network, Sprint has thus used its owner Softbank to orchestrate a sale-leaseback transaction for the leased phones with a newly formed entity called Mobile Leasing Solutions. These transactions have now gradually started to increase Sprint’s OPEX.

Whereas Verizon and AT&T don’t do leasing, T-Mobile has tested it (called JUMP! On Demand), but scaled it back and shifted its focus to equipment installment plans again. It still means that also T-Mobile’s cost in our graph above actually was higher than it appears. The red silo should have been some 0.7 BUSD higher.

If the free iPhone 7 promotions will be successful (and why shouldn’t they?), the imbalance between revenue of goods sold and cost of goods sold should became even greater in the third quarter.

Time to admit that phone subsidies and two-year contracts never were discontinued?

A few contacts asked for the trends in the revenue and cost of goods sold for the four carriers. Here you are: 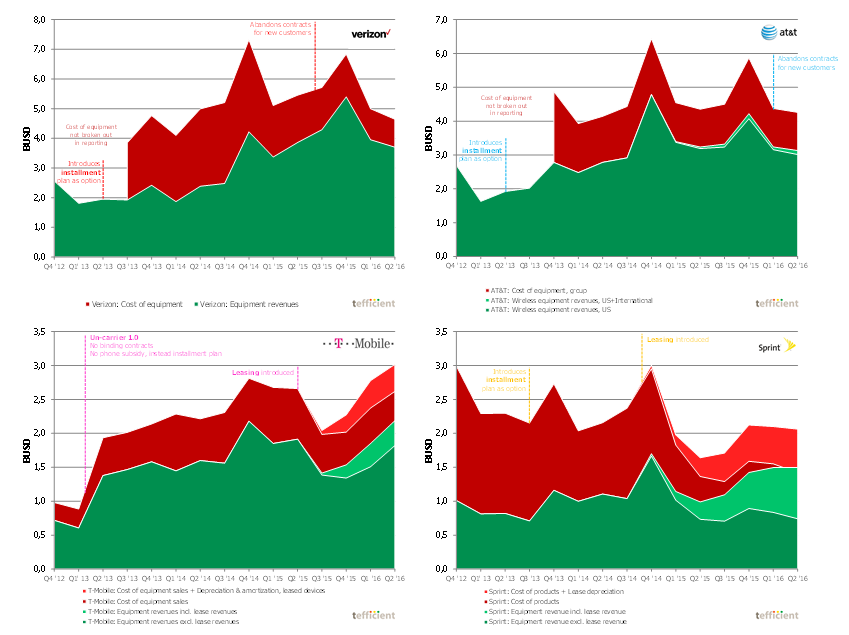 The introduction of equipment installment and leasing plans have most definitely been positive for the revenue of goods sold (the green areas grew). It’s been positive for the equipment margin as well: There’s less red in 2016 than previously. The jury is still out on the long-term effects of leasing: The light red areas show depreciation of leased devices (only Sprint reports cash CAPEX for leased devices). That depreciation is based on an assumption of future residual value for leased devices (which can prove to be wrong).

If you want the four graphs in higher resolution, just send an email to analysis@tefficient.com.