For the first time, OpenSignal, the company that provides an app to crowdsource actual network performance and coverage data, has published a report showing how much time smartphones were connected to Wi-Fi – as opposed to 3G/4G.

The stats are provided for 95 countries. 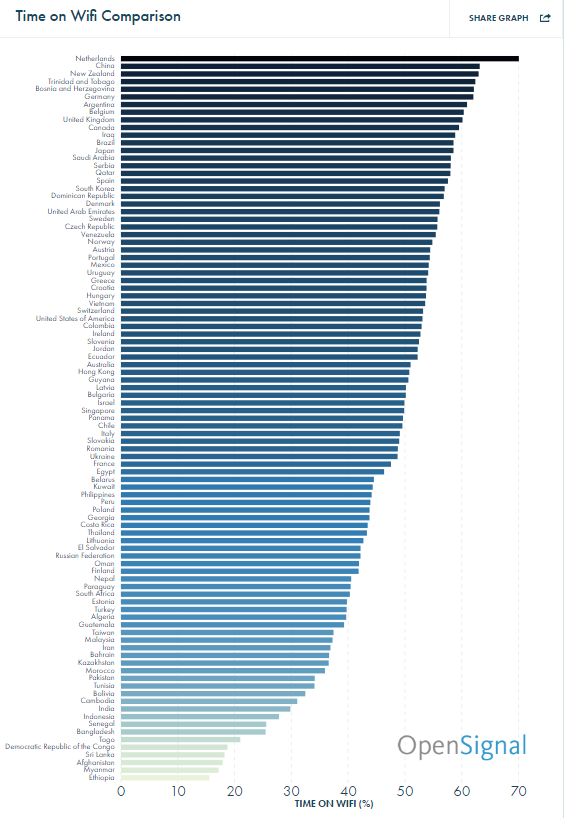 Maturing markets like Ethiopia, Myanmar and Afghanistan are in the bottom of the chart. This is logical since Wi-Fi typically relies on fixed broadband connectivity, something maturing markets often aren’t well supplied with.

But as OpenSignal points out, the countries that make up the top are quite diverse. Most of them are mature mobile markets – like the Netherlands, New Zealand, Germany and Belgium, but you will also find China, Trinidad & Tobago, Bosnia & Herzegovina, Iraq and Brazil in the top.

It’s very interesting – and perhaps fully logical – to find that the three countries which have the highest effective revenue per mobile Mbyte in our data usage analysis – Germany, the Netherlands and Belgium – all are in the absolute top of the “time on Wi-Fi” chart:

It speaks for that high mobile data prices and restrictive caps make smartphone users develop a Wi-Fi first (or even Wi-Fi only) behaviour. A prerequisite for it is ubiquitous access to Wi-Fi, though. As we have showed in our operator Wi-Fi analyses,  the Netherlands and Belgium are particularly well served with Wi-Fi since not only the cablecos Ziggo, Telenet and VOO, but also the incumbents KPN and Proximus followed a Wi-Fi hot- and homespot rollout agenda each providing several hundred thousand up to (in Ziggo’s case) two million Wi-Fi spots per country.

Germany is following: Led by cablecos like Kabel Deutschland (now Vodafone), the incumbent Telekom followed and is now through its “WLAN to go” supplying more than 1 million Wi-Fi spots across Germany.

We have several times written about the uniqueness of Finland when it comes to mobile data monetisation: In the end of 2015, 45% of Finnish SIMs (incl. M2M) had unlimited data – without any cap.

Finland is #68 in the “time on Wi-Fi” top list – alongside Oman and Nepal.

Finnish smartphones are still 42% of the time on Wi-Fi, but if we compare to the neighbouring Nordic countries (where unlimited data isn’t offered), the difference is obvious:

Other countries are however following  in Finland’s footsteps: Switzerland and Latvia (now #2 in the world in mobile data usage) are two examples of countries that gradually have reintroduced unlimited data. Without having any statistics on how large portion of the Swiss and Latvian SIM cards that have unlimited data, we still note that these partly unlimited countries also are ranked low in the “time on Wi-Fi” chart:

But we also need to take a look at the position of the US. In 2015, USA took a quantum leap in mobile data usage, and is now close to South Korea’s global #4 position. The success of T-Mobile and (lately) Sprint – the two operators that, in contrast to Verizon and AT&T, never actually stopped offering unlimited data (albeit with a premium) – seems to have had an effect on the mobile data usage. T-Mobile’s Binge On, which zero-rates video from more than 100 providers, has in addition likely driven mobile data usage. Consequently, it’s not surprising to see that also USA is ranked low in the “time on Wi-Fi” chart:

Neighbouring Canada, known for its restrictive data caps is, to compare, #10. Canadian smartphone users are 60% of the time on Wi-Fi.

From other sources, like Mobidia (now part of App Annie) we have learned that about 80% of smartphone data volume is carried over Wi-Fi. That’s higher than the “time on Wi-Fi” numbers referred to here. There’s no conflict, though.

Users tend to actively prioritise Wi-Fi over 3G/4G in markets where operators have caps on mobile data – especially when in need of larger data volumes. 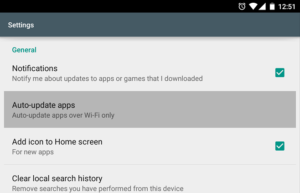 Most smartphones are also, without user interaction, prioritising Wi-Fi with regards to e.g. software updates, delaying these until the smartphone has left 3G/4G and got connected to Wi-Fi. Unless the smartphone user actively has switched Wi-Fi off, this applies to smartphone users even in markets where unlimited mobile data plans are offered – like Finland, Latvia, Switzerland and USA.

Another explanation to why the “time on Wi-Fi” isn’t higher is that OpenSignal included users who disabled Wi-Fi on their smartphones. This obviously reduces the averages presented. Although an uncommon practice in markets with data caps, it’s quite common in markets with unlimited mobile data (like Finland and Switzerland) – or among customers who have purchased very large or even unlimited allowances from their respective operator (like the US or Latvia). The

smartphone consumes less battery when not constantly having to check for Wi-Fi. And annoying pop-up messages about available Wi-Fi disappear.

Before ending, we just need to touch on the position of South Korea. 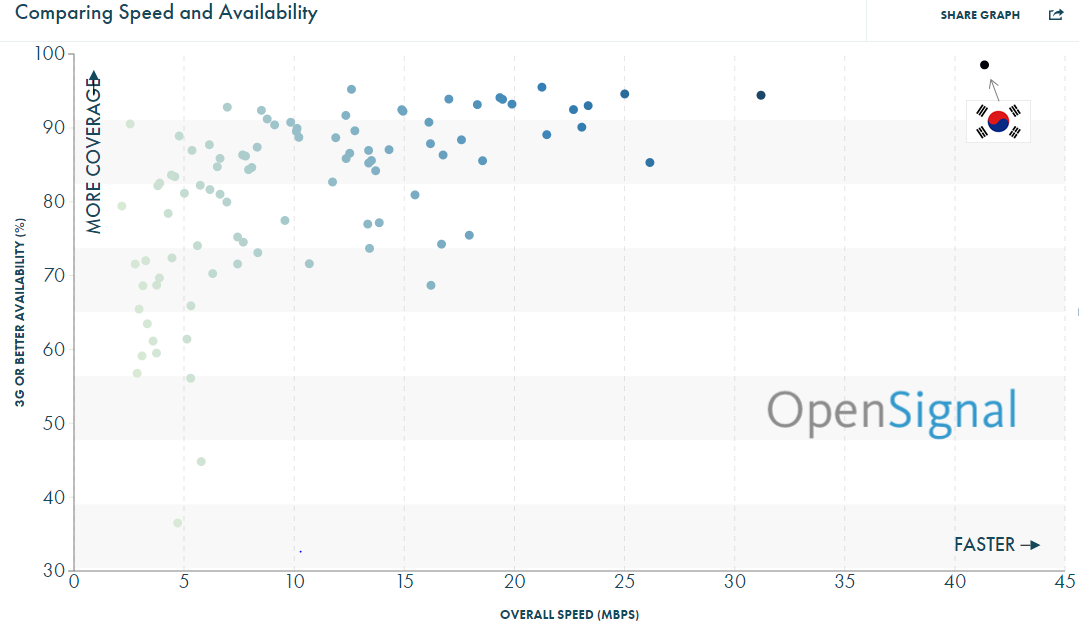 Access the graph here and hover over it to see which countries are hiding behind the other dots.

Even if South Koreans have access to the best mobile networks in the world, it’s interesting to note that Korea is as high as #18 in the “time on Wi-Fi” chart. The average Korean smartphone is on Wi-Fi 57% of the time. In contrast to some other markets where mobile operators look at Wi-Fi as an enemy, Korean operators have – on top of building massive and very capable 4G networks – also built massive public Wi-Fi networks, often with gigabit backbone.

The three Korean mobile operators SK Telecom, KT and LG Uplus are each operating in between 80 000 and 300 000 Wi-Fi hotspots. 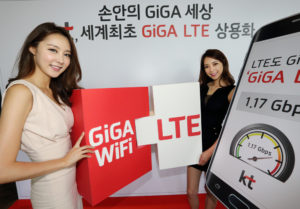 KT took the integration of 4G and Wi-Fi one step further when it is June 2015 launched its GiGA LTE service linking KT’s LTE-Advanced and Wi-Fi services to provide a yet faster, combined, connection.