Those of you that read our series of international mobile data analyses know that Finland is the country with the highest average mobile data consumption in the world. 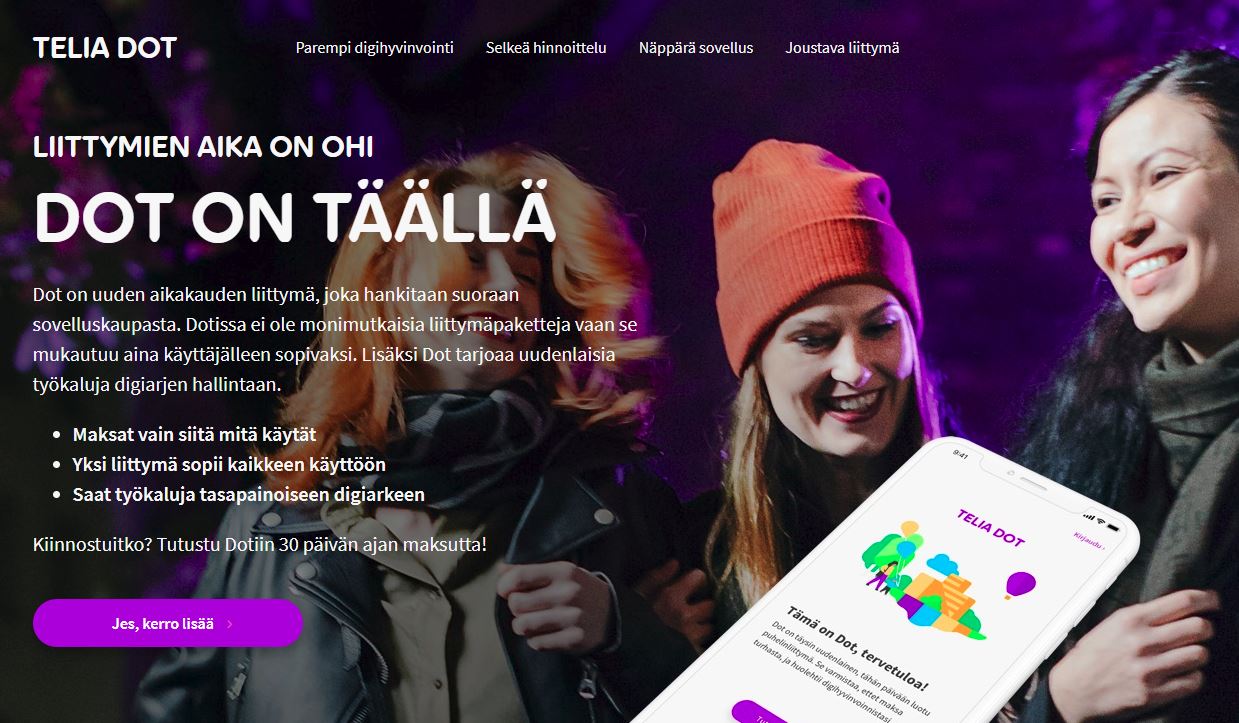 Truly unlimited mobile data is a key explanation to this: 66% of Finland’s mobile subscriptions (excl. M2M) had unlimited mobile data in June. As a direct consequence of this Finns have developed a readiness to try out new apps and services at any location and at any time – as they never have to consider the data consumption or the associated cost. The habit of ‘Wi-Fi hunting’ is not spread in Finland.

Because of the unlimited model, mobile has also come to substitute fixed in many households. The average Finn had 1,72 mobile subscriptions in December 2017 – much more than the Nordic neighbours:

But even if its worry-free with an unlimited mobile data subscription it’s not necessary cheap.

The Finnish subscriptions are typically charged on speed. But even with the absolutely slowest speed tier (256 kbit/s) and no voice included, it’s 7 EUR per month. Every month. For cases with high usage – like smartphones or home internet – the regular Finnish subscriptions are without a doubt providing good value for money (see Figure 14 here), but how willing would anybody be to spend 7 EUR or more every single month on a subscription for cases with low or rare usage like a secondary  phone, a connected laptop, the fishing hut in Lapland, a dog tracker or a wearable gadget?

Since the Finnish smartphone penetration has levelled out at around 80% and 60% of addressable customers already pay for 4G speed tiers, the monetisation upside isn’t as obvious any longer for the three Finnish MNOs Elisa, Telia and DNA. The Finnish operators, especially DNA, have otherwise spoiled us with unparalleled mobile service revenue growth in 2017 and 2018. 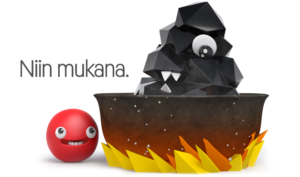 An MVNO, Moi, has had success in the Finnish market with a model not based on the ‘one size fits all’ which totally dominates the offers among the MNOs.  Their basic why-pay-for-something-you-don’t-use message appears to have resonated well with pockets of the Finnish market. Moi has recently expanded into the business market as well.

Even if Moi’s market share – according to official statistics – wasn’t more than 1% in June, it’s natural that one of the MNOs would react. Telia is generally not perceived as the MNO that brings useful innovation to the Finnish market – some Finns are still suspicious of Telia ever since the company (then called Sonera) introduced shared bucket plans as a replacement to unlimited in 2013. It didn’t play out well and even if Telia stopped it, Elisa’s marketing is still after all these years hammering in the message that Elisa is synonymous with unlimited.

With this perception in mind, it’s interesting that it’s Telia that makes a serious attempt to innovate in the name of customer friendliness. 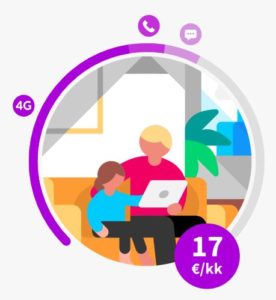 It’s an all-digital proposition which addresses each an every connectivity need one might have in mobile. But it’s not a ‘one size fits all’ proposition, it’s a proposition that resizes to usage levels and usage patterns. We think Dot gives an indication of where our industry needs to move next – keywords being flexibility, adaptability, app-based sales & upsell.

Pay when you use it

When the smartphone and home internet market is fully penetrated, market growth can only be sustained by entering new segments. As discussed, unlimited month-by-month contracts typically don’t suit the usage profile or usage habits of auxiliary, secondary, connections very well. And even though Finland has the highest average usage in the world, the median usage is much lower so there are plenty of primary connections that could be addressed as well.

One of the key characteristics of Telia Dot is that you pay when the subscription is used – but not when it isn’t. Unlike a month-by-month plan for e.g. a dog tracker that would cost 7 EUR per month even though the dog owner might only use the tracker for a few weekends during a year, the Telia Dot subscription in the tracker would only cost those days when it’s on the network (heads up for fine print; read on).

The exact pricing of Telia Dot is actually quite complicated. Telia doesn’t want you to look into it; it’s well hidden. They instead want you to remember two things:

If we go a bit deeper, the first usage of any kind – voice, text, data – per day will be charged 0,2 EUR. So when you have started to use it, the charge is never going to be less than 0,2 EUR per day.

Further voice, texts and data are then charged on top according to actual usage in a quite complicated way where the unit price per minute, text or GB goes down. The table below shows how the unit price per GB develops with the spend per day.

With lower usage, you pay more per unit – with higher usage less per unit. This is true also for voice and messaging. But it stops when you reach 1 EUR, then you pay 1 EUR regardless of how high the usage is that day.

International calls and premium numbers are of course not included; that’s not controversial. But this wouldn’t be a telco proposition without some fine print, and here it is: Unless a subscription has generated 15 EUR of revenue during three months, Telia ‘has the right’ to charge 5 EUR per month.

In other words: Telia Dot will never cost less than 5 EUR per month. This makes quite a few very low usage cases less attractive – like our dog tracker case – but leaves space for medium-usage cases that aren’t very well served by the current unlimited subscriptions.

Always up to 100 Mbit/s and always with EU roaming

Even with a minimum price of 5 EUR per month, Telia Dot brings some benefits compared to the throttled cheapest plans currently in Finland – the most obvious being that it always supports a speed up to 100 Mbit/s. A regular smartphone subscription with that speed would trade at around 25 EUR per month online.

Another benefit compared to the cheapest, throttled, plans is that Telia Dot includes EU roaming. It’s actually better than that – in a typical Telia fashion, you can use your unlimited data not just in Finland, but in Sweden, Norway, Denmark, Lithuania, Latvia and Estonia – where Telia Company produces it inhouse. You might end up paying 1 EUR per day for unlimited data, but it is truly unlimited. In the rest of the EU, up to 0,36 GB per day is included.

Telia Dot is also non-binding – one month at a time. Just like any digital subscription is outside of telco.

When does it pay off then?

Here’s where Telia Dot starts to be clever and digital. Before signing up for the service, the Telia Dot app will – based on the actual usage recorded by the phone – calculate what your usage would have costed you in the past month. You would of course need to give your consent to do these calculations, but it’s an smart way to use the information in the phone. It also allows Telia to make the calculation also for potential customers currently with Elisa, DNA or Moi.

In true Netflix-style, Telia is giving the first 30 days for free.

But we of course needed to calculate how much mobile data a Telia Dot user would have to generate to reach the maximum 1 EUR day fee. That works out to be 0,47 GB. So if you use 0,47 GB or more every day, you will end up paying 28-31 EUR per month for Telia Dot. This is a bit more than the market price for a regular subscription with the same speed and with inclusive EU roaming. If you also use voice and messaging, you will reach that 1 EUR per day threshold quicker.

0,47 GB per day corresponds to around 14 GB per month. Since the average usage per non-M2M SIM in Finland was 16 GB per month in the first half of 2018, it suggests that Telia Dot will be interesting for many Finnish mobile subscribers, but not for all.

Get unlimited data when you need it, and savings when you don’t.

No regular bill – credit card only

Telia Dot will – just like Spotify and Netflix – charge the subscriber’s credit card monthly for usage. Telia has apparently decided that the billing relationship that telcos typically hail isn’t worthwhile.

Buy at any time – in the app

Done right, it’s upsell at its best: In-app digital purchases without the need to visit a Telia store, a dealer, open some web form or talk to a call centre. It’s scalable, transparent, quick to modify and commission-free.

Digital wellbeing controls – in the app 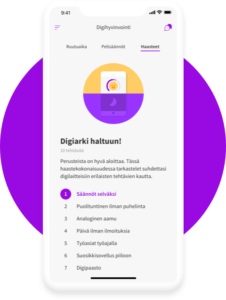 The Telia Dot app is also having tools for digital wellbeing. The fact that practically nobody has any limitations on their mobile data usage in Finland means that there is a lively debate on what this means for e.g. teenagers – but also for small children when their parents risk not giving them sufficient recognition while staring at their screens.

Functionalities to monitor and set rules for mobile data usage are built into the Telia Dot app. The app is also said to be a catalyst for qualitative discussions around mobile usage in families.

We don’t believe in coincidence. The same Telia yesterday published survey results showing that 83% of Finnish parents in families with children feel that they spend too much time on their phones (the parents seem to be a bit worried about their own habits as well). Of course this release was a prop for Telia Dot.

Telia can now combine sales, self-service and tools for management of digital wellbeing in one and the same Telia Dot app. It feels very 2018 and should be good for upsell and customer retention.

Why should I care?

There’s nothing wrong with the performance of any of the Finnish operators. They were all delivering record results in Q3; EBITDA margins have never been higher, so it’s definitely not an unhealthy market Telia is trying to nudge. 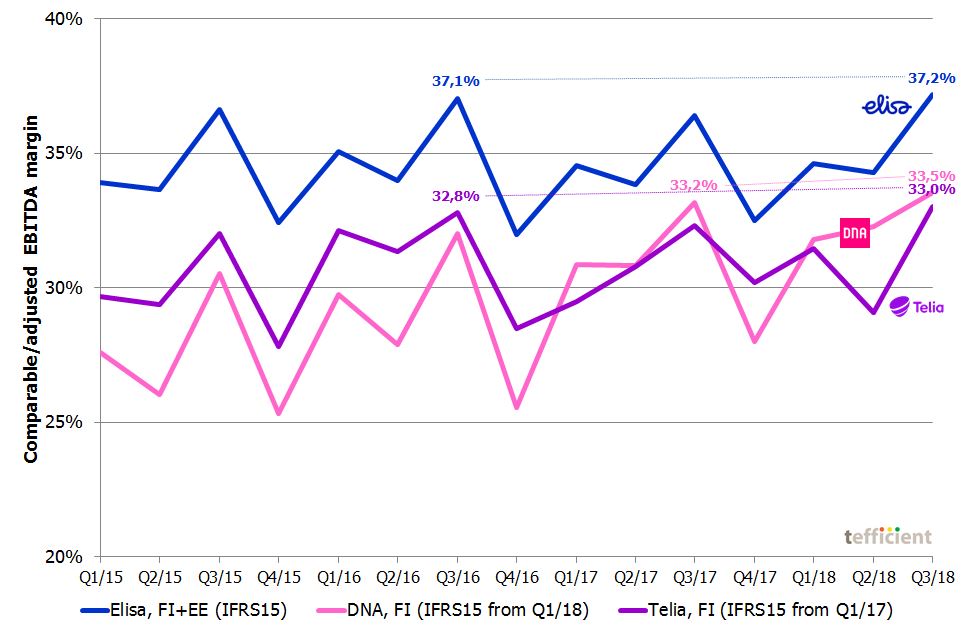 With a generally high customer satisfaction brought by reasonably priced unlimited data plans and excellent networks, it will be interesting to follow what commercial impact Telia Dot will make. The biggest question mark, if you ask us, is if potential customers will understand the pricing. Or trust Telia enough not to care.

Here’s why you should care: We think Dot is one of the better examples so far of ‘telco goes digital‘. A one stop shop for mobile connectivity with a high level of flexibility and adaptability, supporting basically all mid and high-usage use cases in the consumer space. It should fit in an eSIM future. We suggest the industry takes notice, copies, flavours and improves details – like transparency – where seen necessary.