The claims in Verizon’s commercial were based on RootMetrics‘ drive test data – which, in parts, at this time was up to one year old. T-Mobile, that during those twelve months built 4G LTE coverage for an additional 100 million Americans, immediately responded:

Relying on crowd-sourced data from Ookla, the FCC and OpenSignal, T-Mobile said it has America’s fastest 4G LTE network.

Shortly after, Verizon – with the help of Ricky Gervais – countered Sprint‘s network claims. Also Sprint had, partly based on survey results by Nielsen, partly based on city-specific results from RootMetrics, claimed its networks to be the “the fastest”.

Thanks @Verizon and @rickygervais for advertising that @sprint is faster and more reliable. We agree with you pic.twitter.com/3XgdMYwiV3

As these examples show, different network tests and methodologies give different results. Carriers’ interpretation of these results varies even more, though. Carriers tend to favour the measurement in which they win.

Facts aside, what carriers really want is to take ownership of the perception of “the best network”

Even though competition wins tests and are factually closer than ever – or even at par – it’s still Verizon who owns the perception of “the best network” in the US. But it’s slowly slipping out of Verizon’s hands.

Here’s what it’s worth

With a typical subscriber acquisition cost (SAC) of 220 EUR, not having to acquire 4% of a postpaid subscriber base every year saves costs equal to 2-3% of annual mobile service revenue.

This corresponds to about 6% of mobile EBITDA

Suddenly we realise why the carriers fight so fiercefully to claim and defend network leadership.

Is it enough to win a network test to take ownership of the perception of “the best network”?

When you own it, why lose it?

But as much as “the best network” has been a key reason to the success of incumbents like Verizon, KPN, TDC and Telia, it’s surprising to see that these incumbents through relative under-investment have exposed themselves in the perception game around “the best network”. Challenger operators have, backed up by actual measurement results – from drive tests or from crowdsourced data – successfully been able to challenge the inherited view of who has “the best network”.

Without a doubt, Verizon had the widest covering and best network and was also first into 4G LTE in the US. In part, this was driven by the need to quickly transition away from Verizon’s 3G – which is CDMA and an evolutionary dead end.

With catch-up rollout, extensive use of low band frequencies (700 MHz), very early introductions of both VoLTE and Wi-Fi Calling – and a marketing frenzy never before seen in our industry – T-Mobile has managed to challenge Verizon’s position. Using crowdsourced data, T-Mobile has “proven” that their network, not Verizon’s, provides the best customer experience where the network actually is used. Verizon has responded with multiple references to RootMetrics’ drive tests which likely were accurate, but definitely also aged. Sprint is rapidly improving on its network quality as well; challenging Verizon’s claimed network leadership position.

In the Netherlands, KPN was also first to rollout 4G LTE and was proud to announce “nationwide” 4G coverage already in Q1 2014 – a position difficult to improve upon. Once you claimed nationwide coverage the perception is that you’re ready.

T-Mobile Netherlands, without 800 MHz spectrum, was behind KPN but explained that its intention was to build a denser – and thereby better – 4G network. Nobody believed in this. But in 2016, two independent drive tests, by Omnitele and P3 Group, both proved T-Mobile’s network to be on par with KPN or, in P3’s case, even better. With the support of the data from P3 Group, T-Mobile even claimed its network to be the “best ever measured in the world”, tactically forgetting to mention that P3 Group’s other measurements in essence were limited to Germany, Switzerland and Austria.

Denmark is an example of how slowly the public perception of who has “the best network” changes. TDC, the incumbent and market leader, under-invested in its network for a long period of time while Telia and Telenor at the same time merged their networks into one common network. This was a major project, but the result was that both Telenor and Telia got access to a network of much higher quality than what each company previously had individually.

In 2014, Telenor hired Teknologisk Institut to make a drive test throughout Denmark – showing that TDC’s network was inferior. At around this point in time, TDC started to lose consumer customers in significant volumes to competition.

Finally, TDC reacted and launched a plan to build the best 4G network with the help of a new vendor, Huawei. In mid-2015, the build was ready and TDC was proud to communicate that, based on OpenSignal’s crowdsourced data, TDC’s 4G network wasn’t just fastest in Denmark, but in the world.

Omnitele’s first drive test in Denmark also declared TDC the winner (while competition complained that the “wrong handset” was used since too few Danes at that time had an 800 MHz capable 4G terminal). TDC followed it up by hiring Teknologisk Institut to, in essence, repeat the drive test Telenor did in 2014 – and came out as a winner. Since then TDC’s market share losses have slowed, but TDC hasn’t yet started to win customers back. This is likely because TDC’s action taking was so delayed that the public perception of who has “the best network” actually changed in favour of Telenor/Telia.

Also in Sweden, Telia’s relative under-investment in its mobile network 2012-2014 made Tele2 and Telenor (who shares a common 4G network) successfully challenge the perception of “the best network”. Telia, who was first to launch 4G globally in 2009, decided to build its 4G network on its own instead of as part of a network sharing JV like it did in 3G.

With the combined resources of Telenor and Tele2, the companies could claim a leading 4G rollout not only in Sweden, but in the world. Both OpenSignal’s crowdsourced data, but also an early drive test performed by Omnitele (ordered by Telenor) showed that Telenor/Tele2 had quite a leadership in network performance.

Telia’s reaction was to launch a massive investment programme (including also fiber rollout) and use significant advertising budgets to promote a message along the lines of “we’ve launched the biggest investment program ever and the result will be fantastic”:

Noticeably, in this commercial, Telia speaks about improving the perception of coverage, avoiding to refer to actual measurements.

Based on latest crowdsourced stats from OpenSignal, Telia has also closed the 4G gap on Tele2/Telenor but similarly to TDC in Denmark, Telia’s data usage is significantly below that of competition and the question is if Telia’s “best network position” isn’t today more of a myth. The company is still having a loyal customer base, but has lost market share to competition. 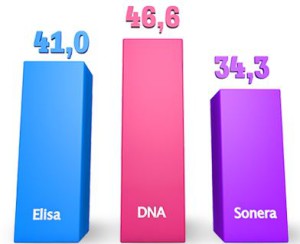 Similar “best network” perception battles are ongoing in Finland, where DNA challenges Elisa’s proclaimed leading position (once taken from Sonera), supported by self-funded drive tests (again by Omnitele) and by the formation of a rural network sharing JV with Sonera.

A few years back, nobody would have questioned Telenor’s network leadership in Norway, but similar to Sweden, the perception of network superiority is gradually slipping out of the hands of the incumbent.

Having the best network is the best churn control mechanism available – if it mirrors the public perception. If you win that position, never ever compromise it. It takes years (and hundreds of millions) to win it back.

6% of EBITDA should provide enough motivation.