When we again dive into OpenSignal‘s crowdsourced stats from the Nordics it is to see if something changed with regards to the network experiences of mobile customers in the region.

This is an update of the previous version of this comparison which was based on data from the autumn of 2017. The old blog contains more background and reasoning.

The data is gathered from December 2017 to February 2018 and covers about 380 million readings from about 12000 unique devices. The data has not been published by OpenSignal but has been shared with us through OpenSignal’s analyst program.

The graph below ranks the fourteen operators in Norway, Sweden, Denmark and Finland after how large proportion of time 4G LTE capable devices have been connected to 4G LTE. OpenSignal calls this 4G availability. 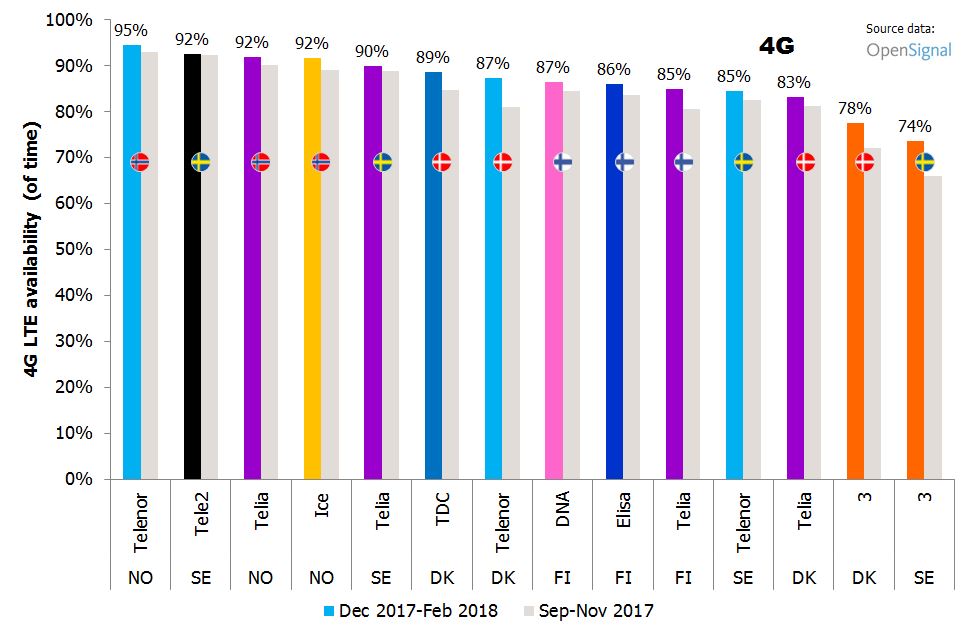 The values from the previous data period (Sep-Nov 2017) are also shown in the graph. 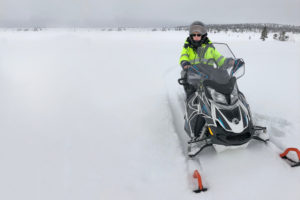 Telenor Norway is providing its customers with 4G 95% of time. Telenor wins this category – just like last time. This is lower than the 99% population coverage that Telenor communicates in its marketing. The difference can be explained by customers being indoors whereas population coverage normally is defined outdoors – and customers spending time in other locations than their home.

Customers of three operators are at 4G 92% of time: Tele2 Sweden, Telia Norway and Ice Norway. Even though Ice is the latest addition to the three operator market of Norway, Ice’s customers are almost as much of the time on 4G as customers to other Norwegian operators. Ice just communicated that its own network now reaches 80% of the population, but Ice’s customers are most of the time roaming on Telia’s network (only 41% of the data traffic was on-net in Q1 2018) so it’s logical that Ice and Telia are close to each other.

In Denmark, TDC is leading in 4G availability whereas DNA has a slight lead i Finland.

3 Sweden has the lowest value among the Nordic operators, 74%, far from Tele2, Telia and Telenor. If we look at statistics from the Swedish regulator, PTS, we see that 3 is heavily under-indexed on the share of data traffic that is carried on 4G: 61% vs. competition’s 89-91%. 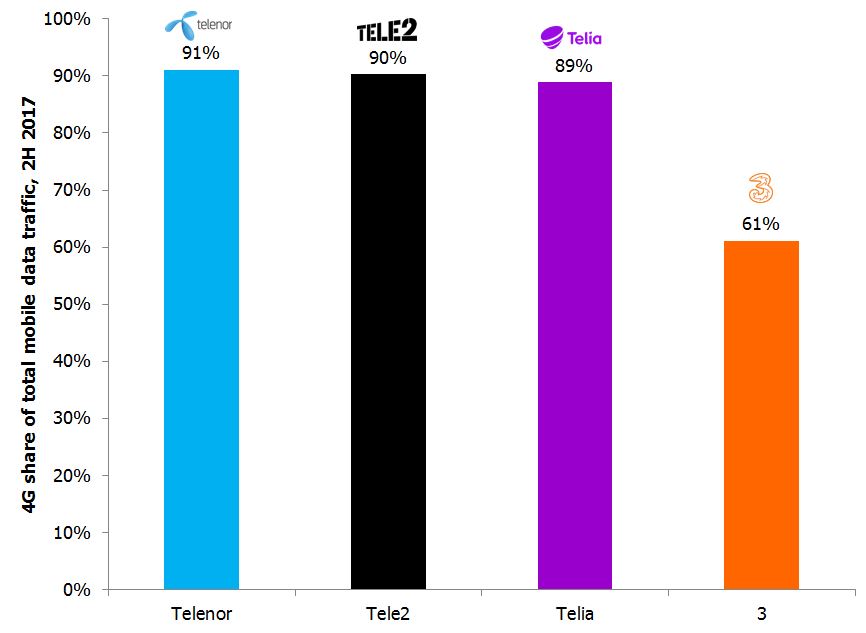 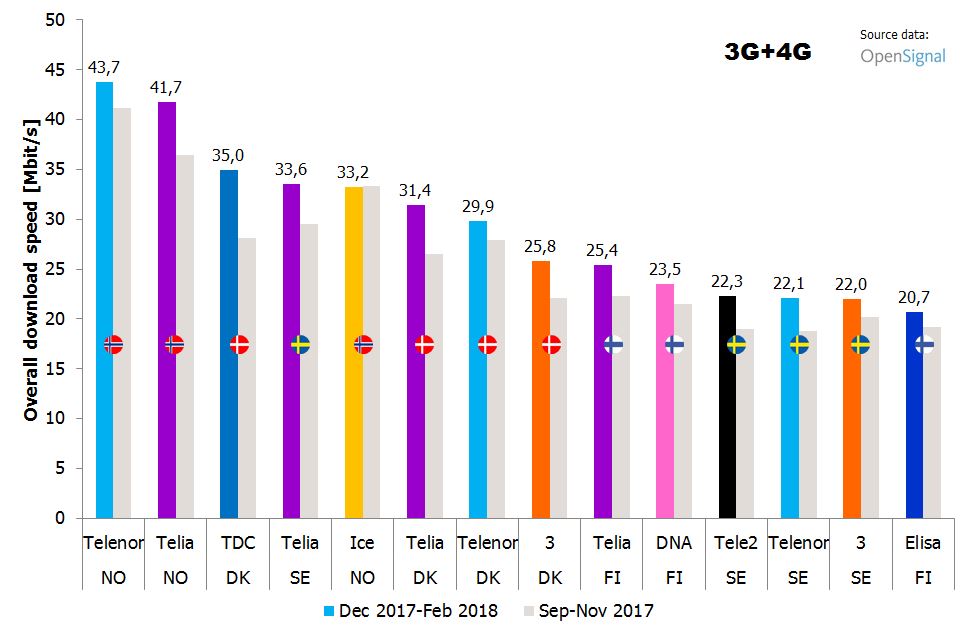 The Norwegian operators Telenor and Telia are leading the speed race in the Nordics – just like last time. Ice Norway has though been passed by TDC Denmark and Telia Sweden and is the only operator for which the overall download speed hasn’t increased since the autumn of last year.

In the bottom of the chart we find the Finnish operators – with Elisa providing the lowest overall download speed of all – together with 3, Telenor and Tele2 Sweden.

Could load explain some of the speed differences between the Nordic networks? In the graph below we plot the download speed as given by OpenSignal vs. the average mobile data usage per SIM. 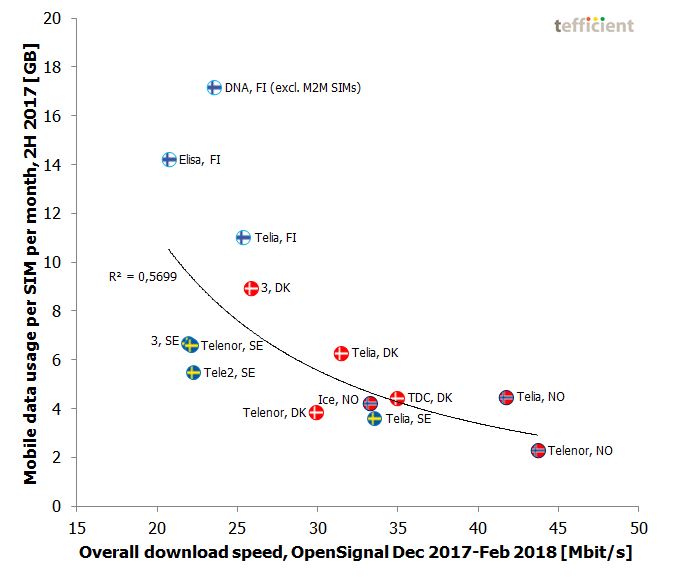 It’s interesting to note that the operator with the highest average download speed, Telenor Norway, also has the lowest average data usage per SIM. The adherence to the regression line is quite strong. Since mobile networks share the available capacity between the users, speeds should in theory be higher in lower loaded networks and lower in higher loaded networks. This seems to be true also in practice.

Networks with lower usage tend to be faster.

Having said this, we have to point out that some Finnish mobile subscriptions with unlimited data volume have been sold with a limitation on the maximum throughput. 23% of the Finnish postpaid non-M2M SIMs subscribed to a speed tier slower than 10 Mbit/s in December 2017.

Who has the network with the highest overall download speed in the Nordics? Telenor Norway (but it is in part due to the lowest data usage).

We just concluded on the overall download speed, but we thought the 3G-only speed provides an interesting comparison. After all, there are many customers out there with terminals that aren’t capable of 4G – and, as seen, 4G networks aren’t available 100% of the time – making 3G networks important or even critical for the overall experience and speed (not to speak about voice where 3G massively dominates 4G’s VoLTE – only 1,6% of the Swedish mobile voice volume was VoLTE in the second half of 2017). 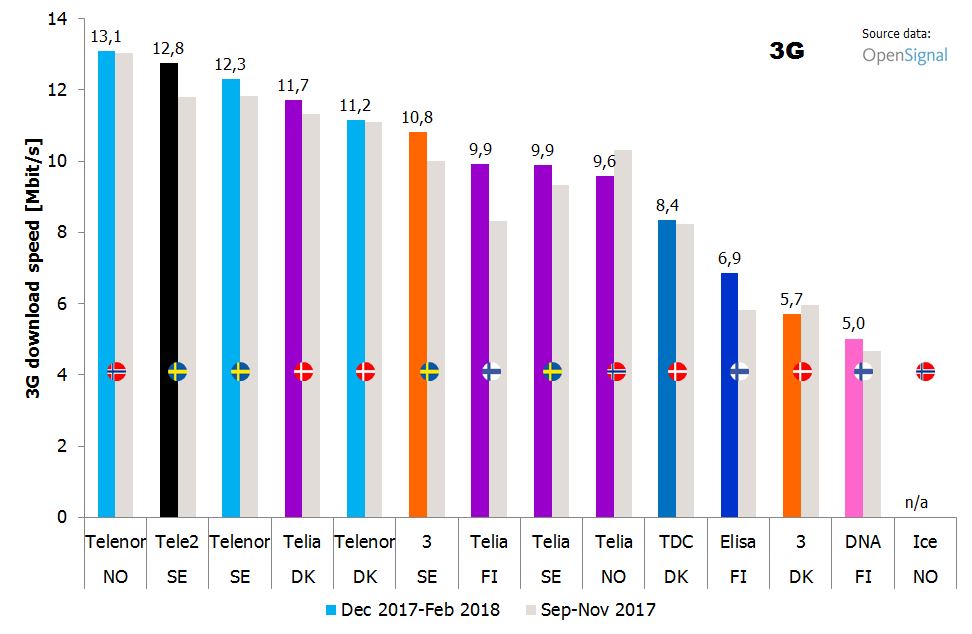 The differences are large in 3G speed. Like last time, Telenor Norway tops the chart with 13,1 Mbit/s (subject to a wide confidence level in 3G: 11,7-14,4 Mbit/s). This is particularly interesting given that Telenor has announced that the 3G network will be shut down by 2020 and as late as last week displayed coverage maps showing that the 3G network coverage will be reduced to half already in 2019. The fastest 3G network in the Nordics is thus likely to be the first 3G network to be shut down. Telenor states that the frequencies are ‘too valuable’ to use on 3G.

The slowest 3G network experience – with roughly only half the speed of Telenor Norway – is offered by DNA Finland, 3 Denmark and Elisa Finland.

In Finland, the 3G speed ranking is inverse to the data usage rank; DNA has the highest data usage, Elisa is in the middle and Telia has the lowest usage.

Who has the 3G network with the highest download speed in the Nordics? Telenor Norway (but the network will close soon).

While the engineers and management of Telenor Norway now has another opportunity to celebrate, we would just like to remind everyone that whereas Telenor Norway provides the best mobile experience in the Nordics based on these three metrics for its customers where they tend to be, it doesn’t mean that Telenor would have the best network in every location. It is also difficult to compare different countries as customers have different usage and location patterns. One thing is clear, though: We have access to extraordinary well covering 4G networks in the Nordics. The graph below highlights the position of the 14 Nordic operators (in green) when it comes to 4G availability when compared to operators in the Netherlands, Hungary, Switzerland, Belgium, the UK, Spain, Italy, Austria, France, Germany, Portugal, Poland and Greece. 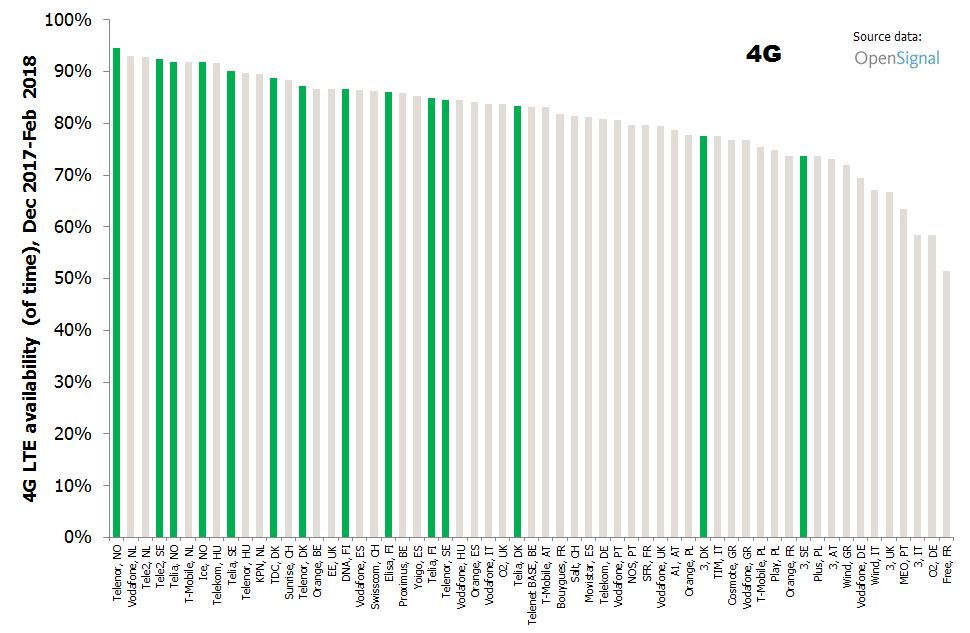