4G coverage is great as well – but 4G speeds are slowing

OpenSignal just issued its first State of Mobile Networks report covering the four Nordic countries Sweden, Denmark, Finland and Norway. Based on 34 million crowdsourced tests taken in Q1 2016, OpenSignal shows which country (and which operator in it) that has the best:

And it is a race of high standards and tight results.

Every single network – with the exception of 3 Denmark – wins or co-wins at least two national categories.

“The Nordic operators’ 3G networks have no equal in speed”

In the graph below we have ranked OpenSignal’s measured average 3G download speed of the Nordic operators: 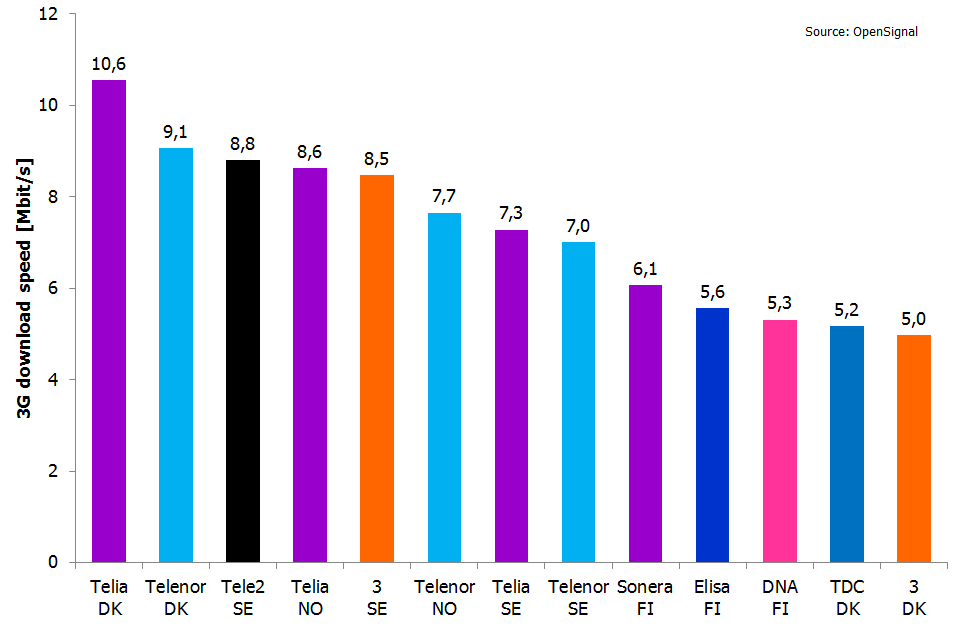 Telia and Telenor Denmark lead. These two operators are also sharing the same network via the TT-Netværket JV.

Network sharing in 3G is also present between Tele2 and Telia Sweden (via Svenska UMTS-nät) and between 3 and Telenor Sweden outside of the three largest cities (via 3GIS). Also Sonera and DNA Finland have recently started to share networks in the North and East, more rural, areas of Finland, but OpenSignal says it has so far had a minimal impact on these results.

If we instead ranked 3G latency, the three Telenor affiliates would take all three top positions – Norway first, followed by Denmark and Sweden.

But isn’t it 4G that matters for the customer experience today? Yes, it matters since the measured download speed of the slowest 4G network is faster than the fastest 3G network: 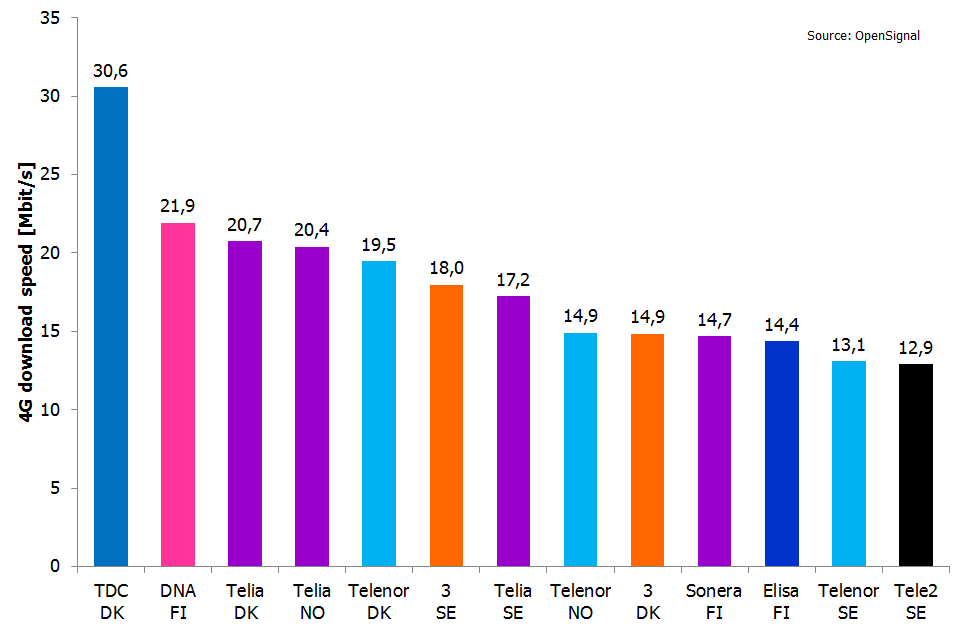 4G latency is also lower than 3G latency for all operators. But there are still five 3G networks that have lower latency than the 4G network with the highest latency, 3 Denmark.

But according to the Swedish regulator, it was just 42% of the Swedish mobile base that used 4G in 2015. The other Nordic regulators aren’t reporting this indicator, but Norwegian operators are likely on par (or slightly higher) than Sweden whereas Danish and Finnish operators should be behind Sweden on 4G penetration.

To this 4G penetration issue – which arguably will solve over time – comes the issue of 4G coverage: 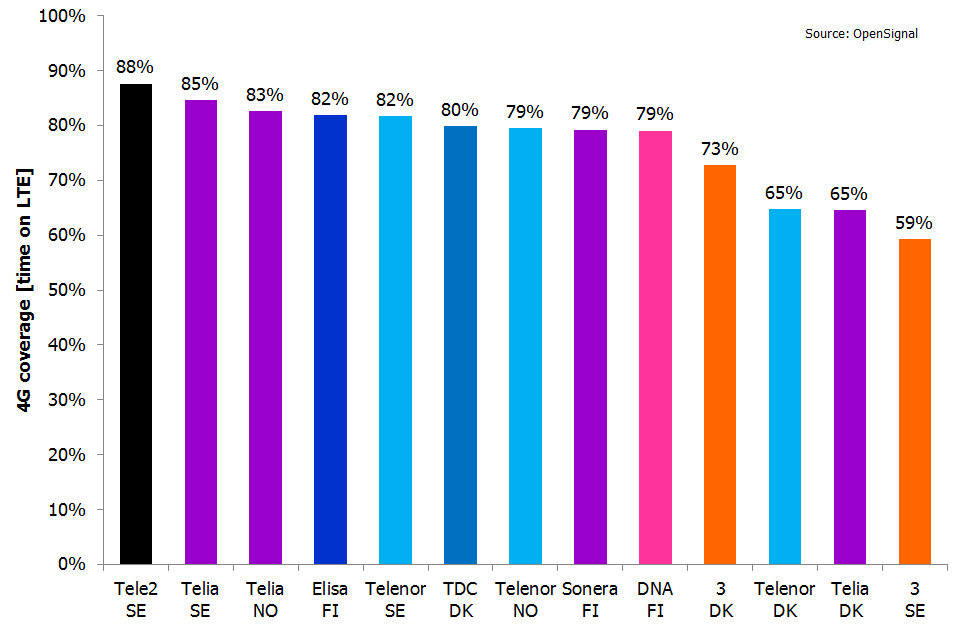 Customers of Tele2, who shares 4G network with Telenor Sweden, spend the highest time on 4G – 88%. Only four of 13 Nordic operators – the two ‘3’ operations and the shared Telenor/Telia Denmark network – are below 79% time on 4G.

Which still leaves a gap: If you have a 4G capable terminal and subscription, you will still be on 3G outside the coverage area of 4G.

OpenSignal picks winners in the different categories country-by-country, but not an overall Nordic winner. Our view is that the answer will have to be “it depends”.

For users with a 3G phone, Telenor Denmark – second best in 3G speed and with second lowest 3G latency – could be seen as one winner. Telia Denmark, sharing the same network, should obviously be the other.

For users with a 4G phone, TDC Denmark – first in 4G speed and with lowest latency – must be the winner, right? Yes and no: The problem is that TDC’s 4G customers are on 4G just 80% of time – 8 percentage points lower than best-ranked Tele2 Sweden. TDC’s 4G customers spend 20% of the time on 3G. But TDC’s 3G speed is only half of what their competitor, Telia Denmark, delivers. Also latency is high on TDC’s 3G. With better 3G performance – or full 4G coverage –TDC could be a winner for the 4G user. Now we refrain from picking one.

A worrying signal for 4G speed leaders is this:

“But when it comes to LTE speeds, the region has fallen from its once commanding position”

As OpenSignal points out, average 4G speeds have come down – especially in Sweden (which, as said, likely has a higher 4G penetration). It suggests that load has started to become an issue for the 4G networks.

This means that 3G network quality still matters much. Not only as fallback where 4G networks don’t cover, but also as an offload network to crowded 4G networks. As OpenSignal’s measurements show, the best designed Nordic 3G networks are close to both the speed and latency of a few 4G networks. Where 4G covers.

Outside the 4G coverage area, they are obviously superior.