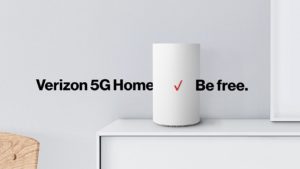 American carriers and uncarriers are embracing fixed wireless as one of the first use cases that 5G will solve. Verizon finally lifted the curtain on its fixed wireless offering yesterday: Verizon 5G Home. October 1 it will be available for 50 USD per month to existing Verizon customers in certain areas in Houston, Indianapolis, Los Angeles and Sacramento. 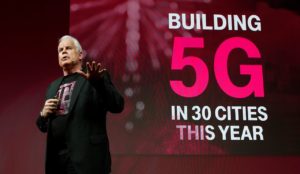 T-Mobile’s 5G will – to use their own words – have more ‘breadth and depth‘ than Verizon’s. With 5G, T-Mobile will position itself within fixed wireless for the first time:

“51% of Americans have only one high-speed broadband option – no choice at all! The combined company will create a viable alternative for millions by enabling mobile connections that rival broadband, driving prices lower and improving service.”

The only caveat when it comes to T-Mobile’s ambition is that it is conditional. This will happen if T-Mobile and Sprint are allowed to merge – a decision not yet made.

But if fixed wireless is up and coming in the US, it’s actually a pretty established business for a few operators across the pond – in Europe.

Looking into our mobile data analysis for countries, one chart comes across at particularly interesting when we talk about fixed wireless: 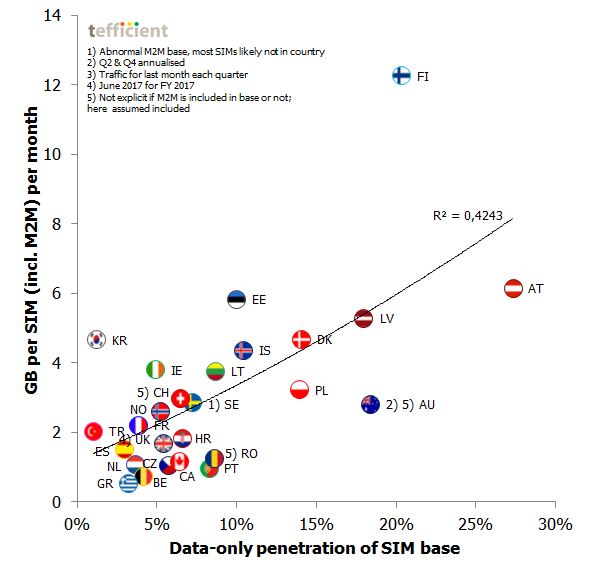 What this chart shows is that there’s a rather strong correlation between the share of SIM base being data-only and the average data usage per any SIM. Although some of those data-only SIMs might sit is auxiliary devices like IoT gadgets or computers, it’s when those data-only SIM sit in fixed broadband-substituting routers something really happens to the usage. It is because we now have a situation where we mimic fixed internet traffic.

As shown in another Tefficient analysis, the data usage per fixed broadband subscription is often a factor 50-200 higher than per mobile subscription. Fixed wireless should be able to swallow all that traffic.

In this perspective, 5G will bring two things to operators:

The latter is important to be able to control the quality of service not just for the whole network, but for specific slices of the network (such as fixed wireless, but it can be much more advanced than that). 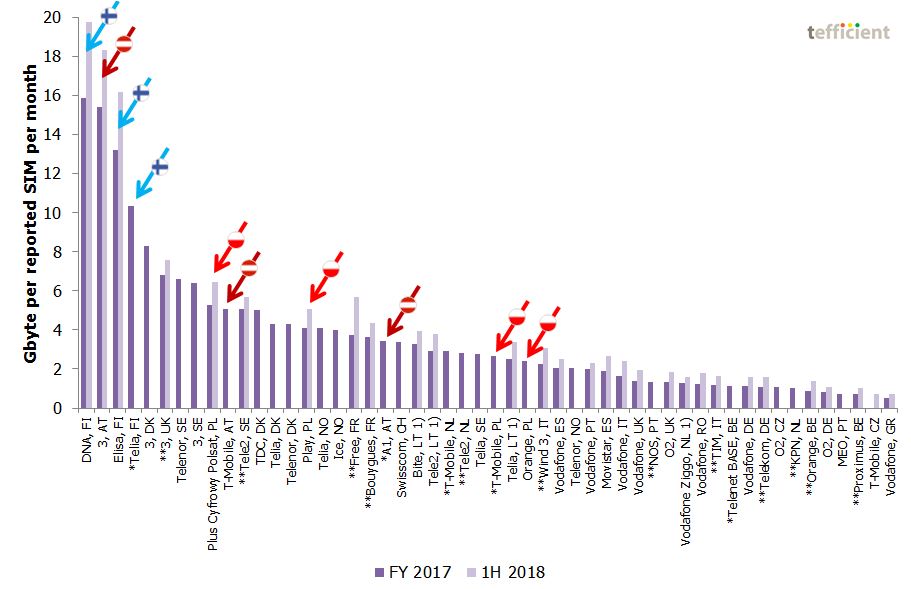 So let’s now look into what happens in these three markets with regards to fixed wireless.

Is fixed wireless the cause or the effect? It can be debated, but the player that claimed the fixed wireless space first in Austria is 3. The company carries 50% of the nation’s mobile data traffic even though it’s the smallest of the three MNOs in Austria.

It is a change of strategy from 3 and it follows on the introduction of hybrid fixed-mobile routers from A1, the incumbent operator, in the mid of 2016. 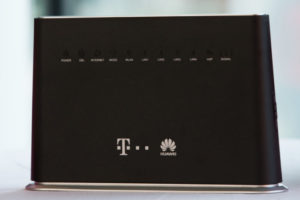 Also the third MNO in Austria, T-Mobile, introduced a hybrid fixed-mobile router at the end of 2017. It was a surprise since T-Mobile at that time didn’t have a fixed network.

3’s recent entry into fixed should perhaps be seen in the light of this. As said, 3’s share of Austria’s total mobile data traffic was still a whopping 50% in 2017 – but that share decreased from 64% in 2016.

Finland is lagging behind other Nordic countries* in fixed broadband. 63% of Finnish households had fixed broadband in December 2017. 29% of them were DSL-based and 24% cable TV-based. FTTH stood for a low 6% but FTTB had a solid 40% share. 32% of the whole fixed broadband base subscribed to 100 Mbit/s or higher speeds. Without a national fixed incumbent, the Finnish fixed networks are regional or local in coverage. 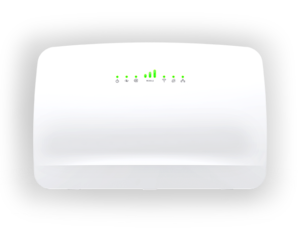 As shown in the mobile data usage chart above, Telia is the operator with the lowest average usage in Finland. Still, Telia was the first to introduce a hybrid fixed-mobile router. It happened in August.

New data from Netradar – a Finnish speed app – show that Finland (right), when compared to Germany and the UK, might actually have a load issue in the evening and nights when people come home to start streaming video.

The red curve – showing the Service Level Score for cellular connections – is dipping significantly in the evenings in Finland and is then below the experience of Wi-Fi. The situation in Germany and the UK – where fixed wireless is a minor thing – is different.

As shown by the data usage chart, there are two mobile operators with higher mobile data usage: Plus/Cyfrowy Polsat and Play. These are also the two operators that have pushed the fixed wireless propositions the most. The offers are currently less attractive that they once were – prices have gone up and policies around e.g. unlimited have become less generous.

Plus and Cyfrowy Polsat are providing a solution with an outdoor receiver and an indoor Wi-Fi transmitter, see the picture to the right.

But customers can now also chose to combine various fixed products into Plus/Cyfrowy Polsat’s smartDOM concept. This has followed on Cyfrowy Polsat’s acquisition of a majority stake in Poland’s fixed challenger Netia – which was approved in May 2018.

So here we have a parallel to T-Mobile’s acquisition of UPC in Austria: Cyfrowy Polsat is now a TV provider, a mobile operator – and a fixed operator. 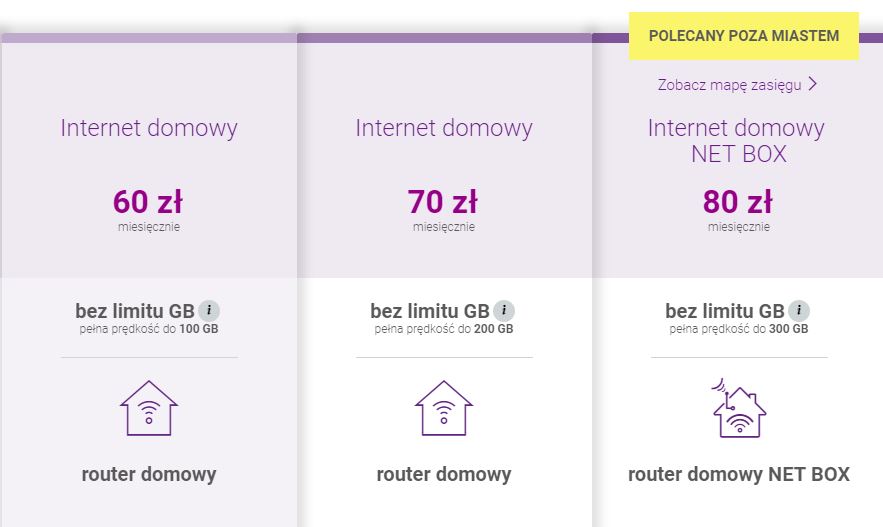 The routers are unlimited in data volume – but with a ‘but’ – after a certain allowance – 100, 200 or 300 GB in the offers above – the speed is slowed. Note that also Play (in the right hand alternative) is providing a solution with an outdoor and an indoor unit.

When operators in other countries – like the US – are preparing for fixed wireless on top of 5G (or, in Verizon’s case, pre-5G), it’s important to look at what happened in markets where fixed wireless is established already.

All this might be intermediate steps waiting for 5G. And if it means that a very expensive FTTH investment can be avoided forever, it’s worthwhile. Or what’s your view?