Investors might still complain about the revenue growth, but measured as percentage of revenue mobile carriers currently produce the best margins on record. END_OF_DOCUMENT_TOKEN_TO_BE_REPLACED

In most European markets where Netflix operates, it has as many subscribers as all other paid video streaming services together. In some of these countries Netflix has more households subscribing to its service than there are IPTV households in the country. END_OF_DOCUMENT_TOKEN_TO_BE_REPLACED 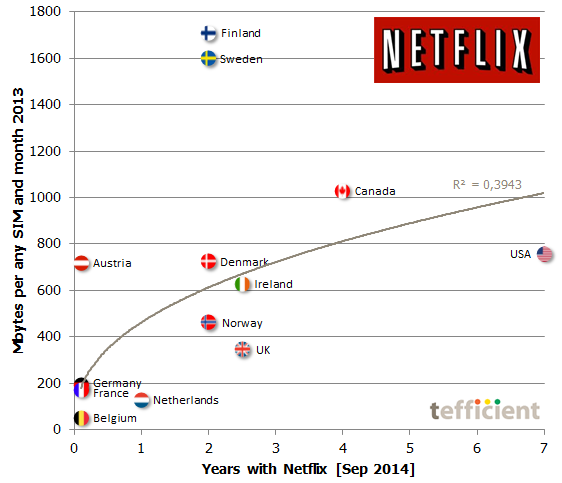 This is a correlation graph that simply had to be done 🙂 We know that Netflix is the single biggest driver of fixed Internet bandwidth in its original market, USA, with up to 40% of downstream traffic at peak hours.

In just two years, Netflix built as large subscription bases as the largest pay-TV providers in some of the European markets launched, so it’s likely that Netflix has a major impact on fixed Internet traffic also in Europe.

One of the benefits with Netflix is portability: It runs on almost any device you might have. Many of these devices – smartphones and tablets e.g. – are often connected over mobile networks. Have the Netflix viewing habits gone mobile beyond Wi-Fi? Can we observe a Netflix effect on the mobile data usage?

The graph correlates the average mobile data usage per any SIM with the number of years Netflix has been in service per country. It’s not perfect, but let’s not dismiss it as just trivia.

Netflix has competitors. The entry of Netflix into new country markets has often paved the way for others (like HBO) when consumers have come to adopt a video streaming habit. Plus that Netflix in most markets have forced incumbent cablecos and satellite providers like Sky to launch portable streaming platforms to complement the traditional viewing experience at home.