Dansk Energi (Danish Energy) is a business and interest organisation for energy companies in Denmark. These companies spearheaded the rollout of fibre networks in Denmark.

In a press release, Dansk Energi concludes that Denmark has among the lowest prices on fibre broadband in Europe. That conclusion is based on a comprehensive price benchmark performed by Tefficient – a benchmark which Dansk Energi has made public. Open the press release and download the benchmark in the “Dokumenter” area highlighted below.

END_OF_DOCUMENT_TOKEN_TO_BE_REPLACED

But where most incumbents regard copper-based DSL technologies as a fallback for areas where fiber-to-the-home (FTTH) or fiber-to-the-building (FTTB) deployment isn’t financially feasible (or not yet rolled out), a few seem to be determined that copper is it. END_OF_DOCUMENT_TOKEN_TO_BE_REPLACED

This innocent tweet – based on official statistics from the German and Finnish telecom regulators – has currently been read by more than 90 000 people:

END_OF_DOCUMENT_TOKEN_TO_BE_REPLACED

The shock waves reverberate in the European telecoms industry ever since Telenor and TeliaSonera in September deemed it pointless to continue negotiations with the European Commission to win support for a mobile merger between Telenor and Telia in Denmark. END_OF_DOCUMENT_TOKEN_TO_BE_REPLACED

And Europe is divided. END_OF_DOCUMENT_TOKEN_TO_BE_REPLACED

You already have a view about the consolidation of mobile operators in Europe, don’t you?

Some people believe that four mobile operators are the guarantee for sufficient market competition. The entry of Free Mobile in France suggests this. END_OF_DOCUMENT_TOKEN_TO_BE_REPLACED

45 million SIMs: The combined EplusO2 will be the largest mobile operator in Germany and in the European Union. A mobile giant was in practice born today with EU’s approval of Telefónica’s acquisition of E-plus.

But during the more than 11 months of approval, the competitive playground changed: 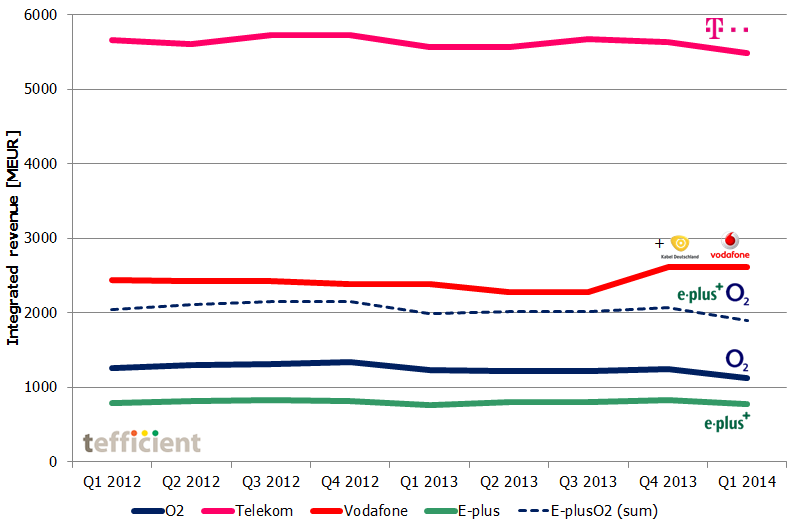 Realising that the future battlefield won’t be mobile-only, we should understand how EplusO2 would rank when it comes to integrated revenue. See the graph above.

When we sum up O2 and E-plus (dotted line), we are no longer looking at market leader. EplusO2 will be number 3.

E-plus is (and has always been) mobile-only. O2 has a fixed arm in Germany, but its share of integrated revenue is just about 25% (and much of it relates to wholesale). What’s worse from a quad-play perspective is that O2 discontinued its TV product by the end of 2013. It never gained more than 90 000 customers – nothing in a country with a population of 82 million.

Telefónica might have something up their sleeve, but the question still has to be asked: Has the mobile-only scale logic behind the merger of O2 and E-plus passed best before date?