Two years ago, telcos were still proudly reporting their progress in utilisation of their own public Wi-Fi hotspots for cost efficient offloading of mobile data. Public Wi-Fi was also positioned as an investment in a better customer experience – especially in public indoor environments. Telcos that were late with 4G – such as in Taiwan and Belgium – could utilise their public Wi-Fi to bridge the transition from 3G to 4G.

You can find this in our telco Wi-Fi analysis from September 2016.

After having built 4.4 million public Wi-Fi access points, China Mobile suddenly stopped the deployment in 2014 and wrote off the investment in 2015. The company instead directed its investments to 4G. In December 2017, the company operated 1.87 million 4G base stations in China. Wi-Fi isn’t even mentioned any longer.

The second largest Japanese telco, KDDI, reported that in March 2014, the company offloaded 57% of the peak mobile data traffic to Wi-Fi in residential areas. Until this point, KDDI had been vocal about the development in the number of Wi-Fi hotspots and in offloading. Since then nothing has been reported about Wi-Fi.

Also the European cableco that used to be most vocal about its Wi-Fi usage, Belgium’s Telenet, stopped talking about it in 2014. It still, from time to time, reports its number of Wi-Fi hotspots and homespots, but no longer usage. Telenet became an MNO in the beginning of 2016 when BASE was acquired. This may explain why offloading disappeared from Telenet’s agenda.

Also the South Korean operators KT and SK Telecom used to talk about public Wi-Fi. Their Wi-Fi networks seem to have peaked in size in 2014 – and now they have both stopped reporting:

To introduce a more positive example, let’s look at

USA’s largest cableco, Comcast. In our analysis from 2016, we showed that Comcast had the biggest Wi-Fi network in the world – even though it primarily consists of homespots, i.e. routers in the homes doubling as public access points using a public SSID open to Comcast customers.

If we look at the development of the number of Comcast Wi-Fi hotspots (see the graph below), we note that the quickest growth, as well as the most frequent reporting, happened in 2015. But the network is still growing – Comcast’s latest reported figure (Dec 2017) is 18.8 million hotspots. A theoretical maximum would be around 27 million – if every Comcast internet customer had an enabled homespot. 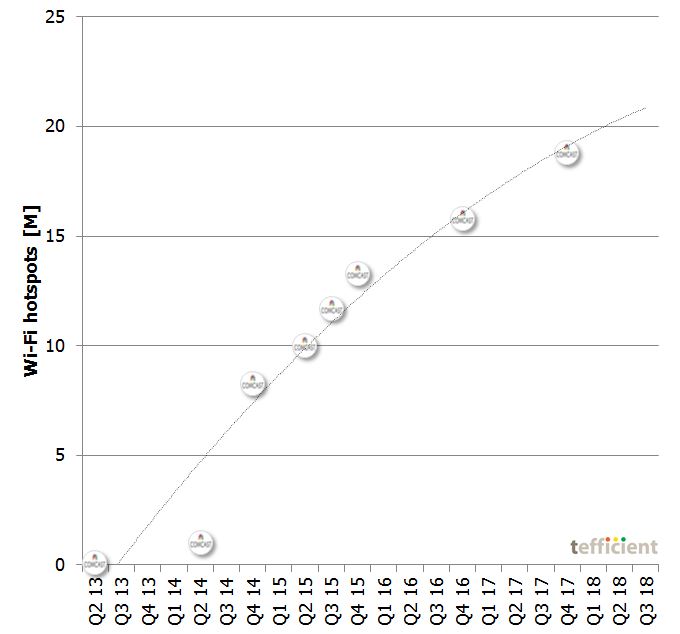 In the second quarter of 2017, the company launched its mobile proposition, Xfinity Mobile, as an MVNO on Verizon’s network. In September this year, Xfinity Mobile had 1.009 million subscribers – exclusively from within Comcast’s fixed internet customer base. In its mobile pitch, Comcast highlights that Xfinity Mobile customers have access to 18 million Wi-Fi hotspots, but it’s not really the feature the company focus on first:

Still, at the Wi-Fi NOW USA conference in May 2018, Comcast’s Rushi Kothari said that:

These are important numbers for Comcast as an MVNO since every GB offloaded should represent a saving for Comcast. In the first nine months of 2018, Comcast’s loss on Xfinity Mobile was 552 MUSD. Even though much of this is due to the fast expansion of Xfinity Mobile’s customer base, offloading traffic from Verizon’s network to Comcast’s own Wi-Fi network helps on the cost side of course.

If telcos generally report less and less on Wi-Fi, the situation isn’t much better when it comes to telecom regulators. They have in fact never really reported Wi-Fi traffic. But there are a few exceptions.

It’s well known that South Korea was a 4G forerunner, but it’s perhaps less known that the three Korean telcos are very advanced when it comes to public Wi-Fi as well.

Korea used to be one of the mobile data usage leaders of the world, but ever since the hockey stick effect following the introduction of unlimited premium plans in the beginning of 2014, Korea has only had linear growth in its mobile data traffic: 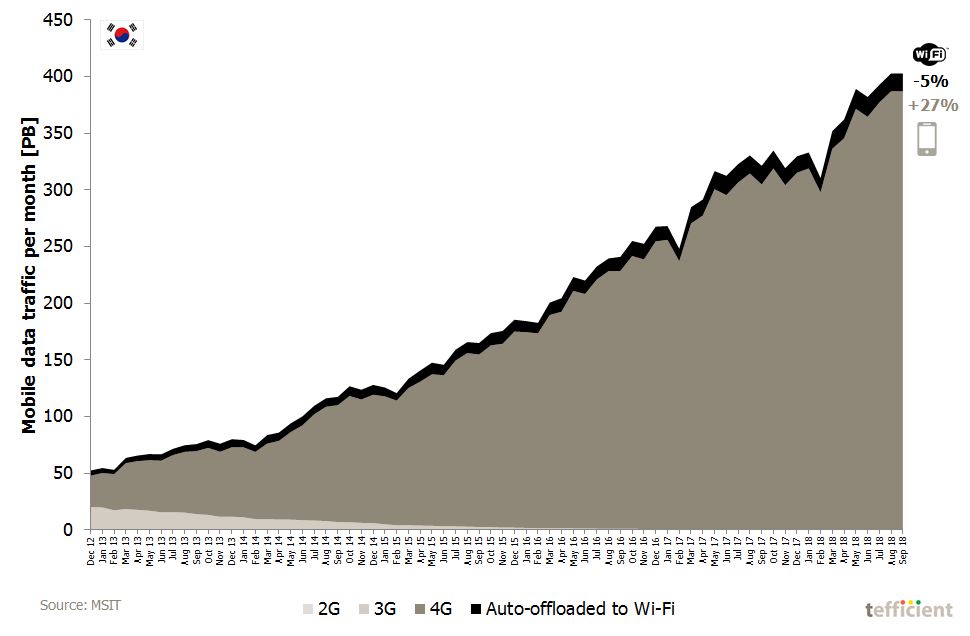 With an average monthly usage of about 5 GB, several countries have passed Korea in usage, see Figure 2 here. From September 2017 to September 2018, the mobile data traffic grew 25%, lower than many other countries.

The graph is also showing that there’s virtually no 2G or 3G data traffic left in Korea: If excluding Wi-Fi offload, 4G stood for 99.8% of the mobile data traffic in September. The Korean operators are not just done with 2G and 3G; they are getting done with 4G as well. 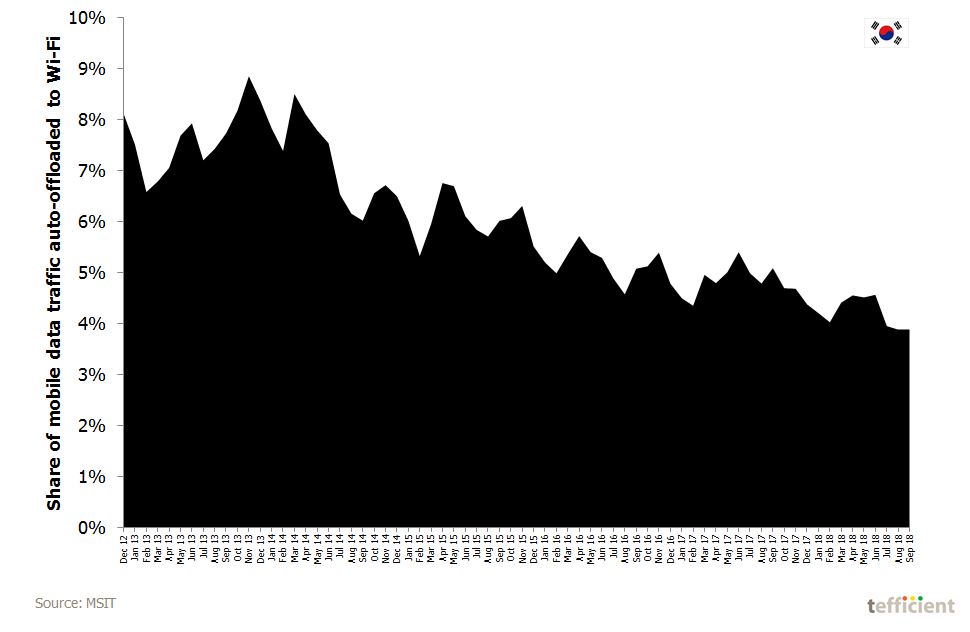 At the end of 2013 and in the beginning of 2014 – around the time of the introduction of the unlimited premium mobile data plans in Korea – Wi-Fi offloaded 8-9% of the total mobile data traffic. In September 2018, that figure was just 3.9%. Since there is traffic growth, Wi-Fi carries twice as many offloaded terabytes as in 2014, but relative to the total traffic, Wi-Fi offloading is less relevant today.

A certain reduction in the deployed Wi-Fi infrastructure (as shown in the table in the first section) might have contributed. In the same time frame, the Korean operators have expanded the mobile networks, meaning that they more often ‘win’ a coverage fight with Wi-Fi. A third reason could be that a higher share of the smartphone users simply have turned Wi-Fi off.

The question is of course if the introduction of 5G effectively will make Wi-Fi redundant in the public space – and if the Korean operators SK Telecom, KT and LG Uplus have started that journey already?

The regulatory authority in Hong Kong, OFCA, doesn’t report Wi-Fi traffic – but it reports the number of public Wi-Fi zones provided by the telcos in Hong Kong. It is above 14000 and in September these zones had close to 57000 Wi-Fi access points. It is a big build for a territory of 2700 square kilometers. With automatic Wi-Fi offload in place, this could have had a dampening effect on the regular mobile data usage.

We have therefore plotted the number of Wi-Fi zones against the mobile data traffic in this graph: 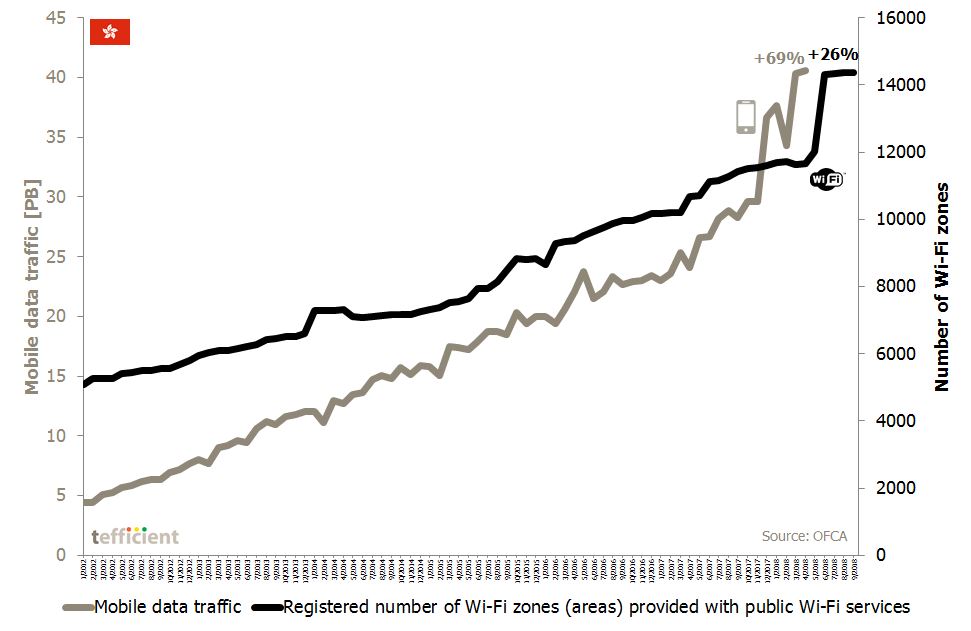 There’s a certain delay in the reporting of the mobile data traffic, but we can see that at the end of 2017, it suddenly started to grow. From April 2017 to April 2018 the growth in mobile data traffic was 69%. Introduction of unlimited promotions – albeit often throttled – could be a reason to this.

The Irish regulator, ComReg, isn’t just reporting the number of Wi-Fi hotspots but also the Wi-Fi usage – in minutes. That usage declined 10% between Q2 2017 and Q2 2018. The mobile data traffic increased 46% in the same period. 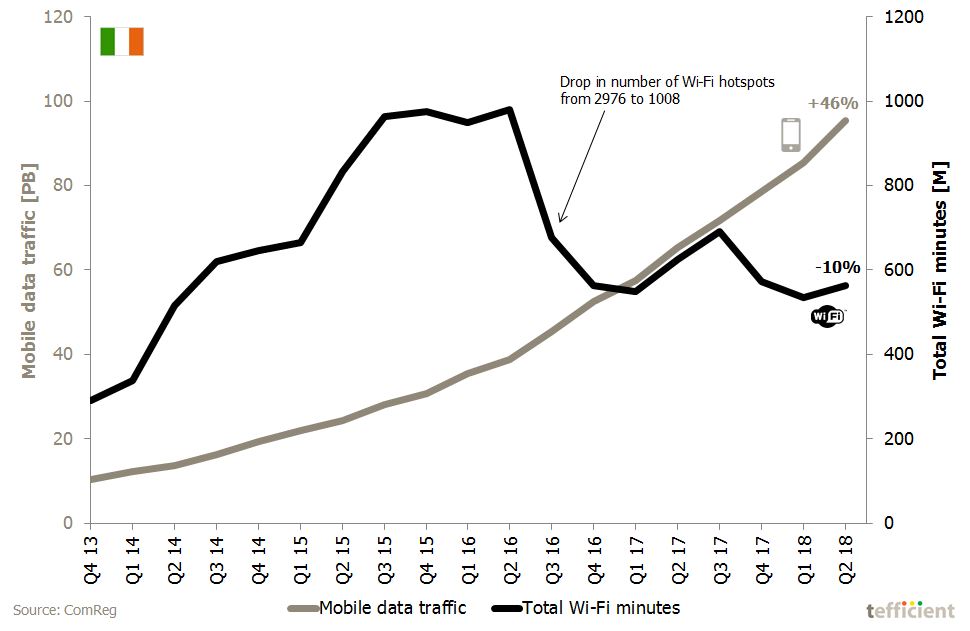 In Q3 2016 there was a dramatic drop in the number of reported Wi-Fi hotspots which led to a decline in the Wi-Fi minutes. This drop is not explained in ComReg’s reports. 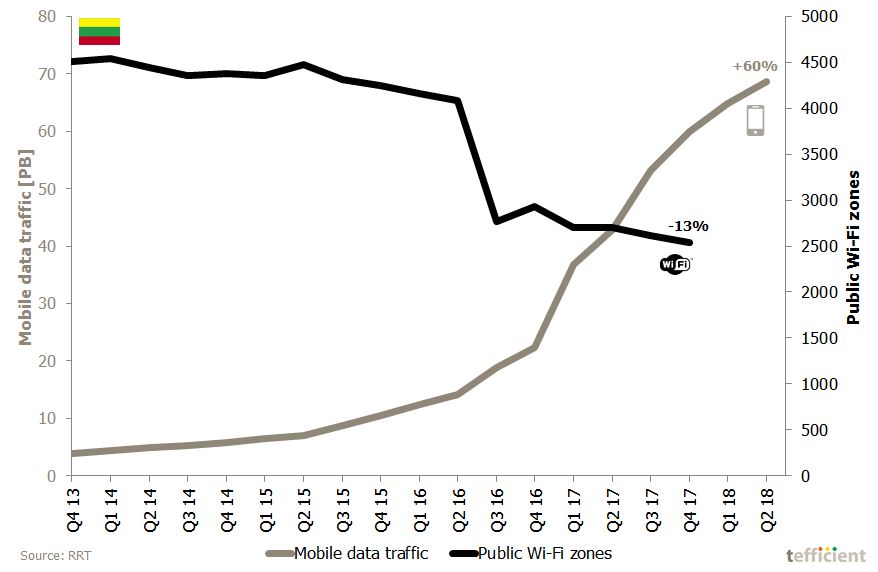 Is Wi-Fi being replaced then?

The available country statistics just presented are clearly – perhaps with the exception of Hong Kong – suggesting that telcos are moving away from public Wi-Fi. But does it mean that smartphone owners use less Wi-Fi?

No. They might use less public Wi-Fi, but overall they are actually using more Wi-Fi than ever.

Strategy Analytics shows that even after the introduction of unlimited mobile data plans in the USA, smartphone users still rely on Wi-Fi to carry 73% to 78% of the total smartphone data traffic depending on network:

Netradar shows that in markets were unlimited mobile data plans are rare, the share of smartphone data volume carried by Wi-Fi is even higher: 83% in Japan and 87%  in Germany.

UK’s regulator Ofcom had a two year project in which anyone with an Android device could download an app with the posh name “Ofcom Mobile Research”. The project, regretfully now ended, resulted in two reports. The picture below compares how the share of data usage per technology developed from Q4 2016 to Q4 2017. 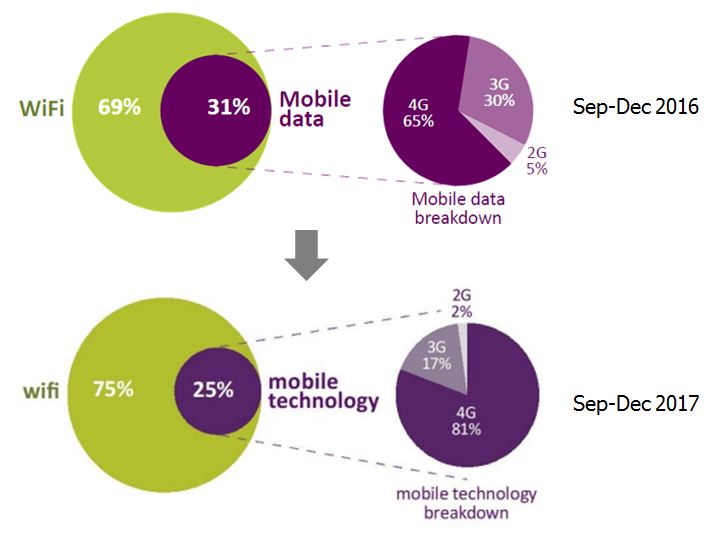 To the end-users, Wi-Fi seems to be as relevant as ever – at least inside their homes. But in the transition to 5G, telcos seem to have lost their interest in public Wi-Fi.