Fiberalliancen is a trade association for companies that own, operate and use fibre networks in Denmark. It is a part of Green Power Denmark.

As part of a press release, Fiberalliancen makes Tefficient’s analysis publicly available. Download it from the right ‘Links’ column. It’s in English.

The release concludes that:

Tefficient’s approach has been thorough and the results are presented in a set of graphs like below.

END_OF_DOCUMENT_TOKEN_TO_BE_REPLACED

The conclusion are summarised (in Norwegian) in a press release from the Ministry: https://www.regjeringen.no/no/aktuelt/norske-mobilpriser-er-fortsatt-hoye-i-nordisk-sammenheng/id2909632/

Both analyses are quite comprehensive and compare Norway to the three fellow Nordic countries Denmark, Sweden and Finland. It means that they are highly interesting not just for the industry and policy makers in Norway, but in all four countries.

Since the Ministry has made both analyses available for public download, you can access them directly and for free from here:

Assessment of Norwegian mobile revenues in a Nordic context – 2022

Assessment of Norwegian fixed broadband pricing in a Nordic context – 2022

Commissioned by Norway’s Ministry of Local Government and Regional Development.

The first analysis investigates whether Norwegian mobile prices should be considered high or moderate given certain specific Norwegian conditions. A multitude of metrics are used – always compared between the same four markets: Norway, Denmark, Sweden and Finland.

The white paper (in Norwegian) summarises the two analyses in sections 7.2.1.4 and 7.2.2.3 using selected graphs and conclusions. The ministry has integrated the key findings with own and independent research, data and viewpoints to form a basis for future policy.

END_OF_DOCUMENT_TOKEN_TO_BE_REPLACED

Which are the equipment sales models in mobile and how have they developed over time? Can best practices be spotted when comparing equipment sales and profitability for a large number of mature market operators globally?

Using facts: What outputs are different equipment sales models such as subsidy, instalment, leasing, rental and BYOD generating – and how is an early upgrade promise affecting?

In this project we identified and documented a few operator best practices across different models in different markets.

END_OF_DOCUMENT_TOKEN_TO_BE_REPLACED

Seeing is believing: After having dug up, read and compiled all reporting and data on Korea’s mobile business there was no other way forward than to seeing it for ourselves and interview people involved in creating Korea’s ‘5G wonder’.

We spent eight busy days (11-18 July) in Seoul to finish a comprehensive 106-page analysis – full of graphs and photos – with recommendations for European operators.

END_OF_DOCUMENT_TOKEN_TO_BE_REPLACED 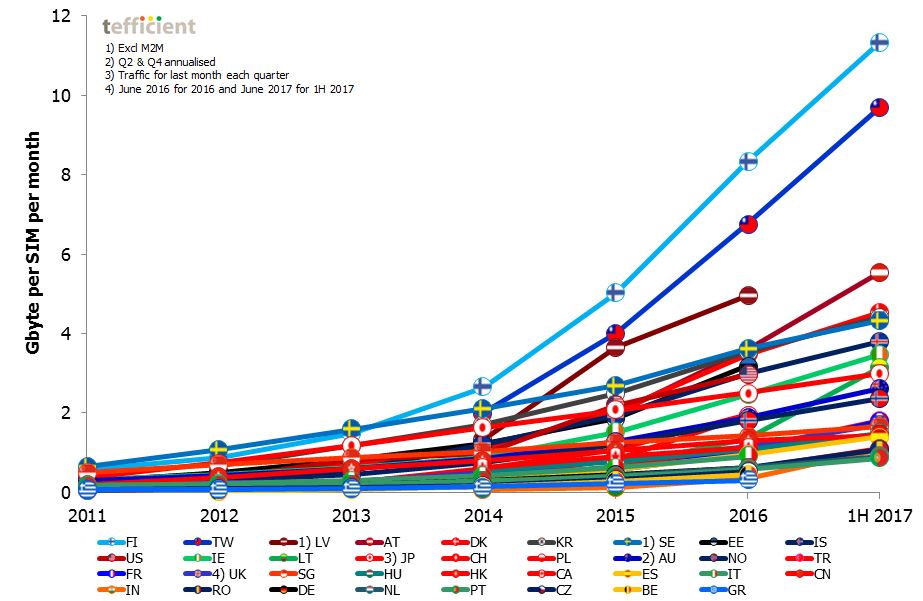 But Elisa doesn’t charge per gigabyte – so where is the revenue growth coming from? How can the company make more profit when it needs to handle all that traffic? This blog reveals their secret. END_OF_DOCUMENT_TOKEN_TO_BE_REPLACED

Writing a comprehensive analysis on CAPEX efficiency and the use of predictive analytics in mobile network design in cooperation with Omnitele.

The analysis can be downloaded from this page:

Increasing the precision of network CAPEX

END_OF_DOCUMENT_TOKEN_TO_BE_REPLACED

Special focus on the development of mobile data monetisation and mobile TV/video over time.

Comparisons done to other countries.

Commissioned by a global solutions provider.

The Finland-based consulting and engineering firm Omnitele has – independently – during first half of 2015 measured the mobile customer experience in three countries: Latvia, Denmark and Estonia. END_OF_DOCUMENT_TOKEN_TO_BE_REPLACED